Return to The Dark Eye with Daedalic, that pesky Satinav and his Chains to boot.

Daedalic Entertainment has announced that its traditional point-and-click adventure game Memoria will be landing in August 2013. The publisher promises the fantasy title will have "a mind-bending twist as it asks you to reconsider what we mean by history, by fame and even by memory."

Daedalic working on new adventure Memoria, "one of five" to be shown at GDC

Indie developer Daedalic Entertainment is continuing their tale of "bird catcher Geron" in the land of Aventuria as they announce 'Memoria', which has Geron working to solve a mystery surrounding a princess.

Daedalic will be showing Memoria off during GDC at the end of the month, and it'll be "one of five" projects from them. The PC adventure is due this Q3 with full localised English. 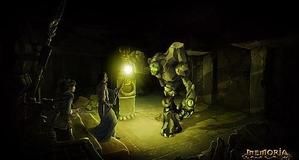