In light of Telltale's Minecraft: Story Mode - The Complete Adventure arriving next week, it has announced that the first episode of the game will be made available for free across all platforms, including the PC, Xbox One and PlayStation 4.

Mojang has announced that there will be hosting what the developer calls the "World's Largest Let's Play", a live stream of the first episode of Minecraft Story Mode, "The Order of the Stone".

Here's the first trailer for Minecraft: Story Mode Episode One

Telltale Games has released the first story trailer for Minecraft: Story Mode Episode One - The Order of the Stone, ahead of the narrative adventure game spin-off's debut on October 13.

The titular Order of the Stone are a band of adventurers in the newly plot-heavy world of Minecraft who managed to defeat the Ender Dragon, who fans of the original game will remember fondly. 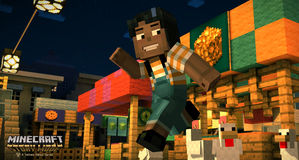