Need for Speed: Most Wanted currently free on Origin

You remember Origin, right? No, not the creators of Ultima and Wing Commander. The digital download software EA saddled you with! They really want you to keep Origin installed. You’ll do that for your old buddies at EA, right?

Burnout series developer Criterion Games, which developed last year's Need for Speed: Most Wanted, has been reduced to 16 staff, according to a tweet from creative director Alex Ward.

PC Need for Speed: Rivals "will look easily as good" as next-gen, unclear on features

While the visual fidelity of Need for Speed: Rivals on PC will be keeping pace with the Xbox One and PlayStation 4, confirms executive producer Marcus Nilsson, he didn't say if the feature-sets would match.

The next-gen versions come with 'AllDrive' which acts to seamlessly adapt players into crossing paths in Rivals' open world, but it doesn't feature on Xbox 360 and PS3 - so what about PC?

It's official as EA now confirms the existence of Need for Speed: Rivals after a Frostbite developer tweeted about it a little earlier. The next instalment is being handled by Ghost Games. It's focusing on cops and racers.

We can choose to play as either with challenges and collectibles strewn through the world. In Rivals we rise in the ranks using all our pursuit and evade tricks. AllDrive has friends drop-in and out.

Need for Speed: Most Wanted (2012) Essentials 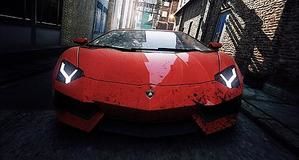