The "built from scratch" remake of the original Oddworld: Abe's Oddysee is releasing today on PC. Oddworld: New 'n' Tasty is finally available for desktop gamers having already released on PS4 back in July 2014.

Much of the original team worked on this next-generation version of the classic PS One game, and even supports the old control layouts for extra nostalgia. Achievements and leaderboards join the fight.

Oddworld: New ‘n’ Tasty will arrive on Steam next month

Oddworld: New ‘n’ Tasty received a pretty positive reaction when it was released on PS4 last year, and now the remake of the classic (and infuriatingly difficult) 1997 platformer Oddworld: Abe's Oddysee is coming to PC.

It will be available on Steam on February 25, and will ship with the various post-launch improvements and tweaks made to the PS4 version, including classic controls, achievements, cloud saves and online leaderboards.

Oddworld franchise creator Lorne Lanning has claimed that despite his company Oddworld Inhabitants selling over 5 million retail copies of games in the popular series, they missed out on millions of dollars due to unpaid cheques.

Speaking to Metro, Lanning said, "I sold over 5 million games at retail and I never saw one royalty cheque. Now if you go around and ask the rest of the developers who say, ‘Oh, we sold a million units!' Ask them how many royalty cheques they've had and it'll be, ‘Oh, well that's a sore spot'."

If you're looking forward to the upcoming HD remake Oddworld: New 'n' Tasty, here's a chance to check out nine minutes of in-game footage with commentary from creator Lorne Lanning.

It's looking pretty sharp. We'll see it in more detail this week, as Just Add Water has confirmed the game will be playable at E3. 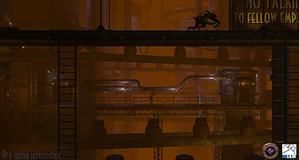