It's kind of a training mode for the game's fast-paced online battles, with four levels for each of the game's twelve weapons in which the player must destroy a horde of aggressive drones. 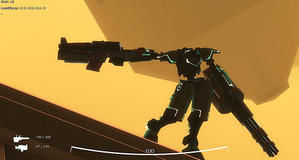