You've played The Elder Scrolls Online, strolled the HD streets of Skyrim and seen the breathtaking views of Dishonored 2's 'Clockwork Mansion'. It can only go up for the views of Bethesda's ground-breaking franchises, so where does that leave them? On a Pinball FX2 table, of course.

Zen Studios has announced that its heavy downloadable content pack for Pinball FX 2, Balls Of Glory, will be released tomorrow on the Windows 10 App Store and Steam.

Archer is the fourth pinball table that will be a part of the "Balls of Steel" pinball table pack for Pinball FX2, joining other Fox cartoons including Family Guy, American Dad! and Bob's Burgers. Zen Studio has also announced a 20 October 2015 release date for the pack.

Zen Studios has announced that the Windows 10 version of their free-to-play pinball sim Pinball FX 2 is now available from the Windows App Store.

The Steam version of Pinball FX 2 (or Marvel Pinball) will finally be getting the Captain America table DLC that was released back in June 2011. The table will cost $2.99 USD, and ties in with the mediocre film that came out two years ago. 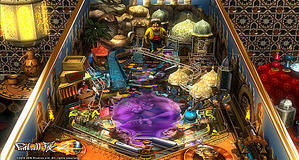