Cubical Drift's Planets³ has concluded its Kickstarter campaign with $310,708 from more than 10,350 backers. Now the Massachusetts-based indie studio needs to wait two weeks while pledges get processed.

They will be opening a store for those who missed out on the Kickstarter campaign, with the first month offering some limited extra rewards before switching to just pre-orders.

The rockets are firing on Cubical Drift's Planets³ Kickstarter campaign as their initial goal of $250k has been met, and they could very well reach their first stretch goal of $300k for more translations and Mac support.

The voxel-based cube universe of Planets³ has just five days remaining for its Kickstarter campaign, and over 6,600 backers have pledged more than $194k. To reach their goal they need just over $55k more.

Planets³ is full of worlds packed with trillions of mineable cubes, and with other planets to explore. It's an RPG with quests and skills to master, and objects to build. 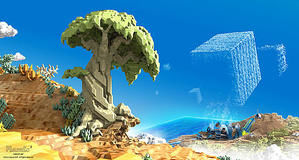