Controversial shooter Postal 2 was released way back in 2003, so you might be forgiven for thinking that the odds of developer Running With Scissors releasing any more content for the game would be pretty damned low. You'd be wrong then, because new DLC pack Postal 2: Paradise Lost is now available on Steam.

Film maker Uwe Boll wants to produce a second Postal movie, and has taken to Kickstarter for $500k in pledges. The campaign reads Postal 2 will "finally destroy the film industry" - which might actually happen.

There's something of a love/hate - mostly hate - relationship between gamers and Uwe Boll. He's no stranger to dragging game IP kicking and screaming onto the film set.

Running With Scissors' Vince Desi has calmed fears that over-the-top violence is dead, saying that Postal 3 has entered it's most "final stages". 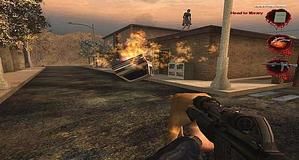