You and your friend will surely enjoy bringing your troops to beat 100 armies of your enemy and taking on the shoe of the hero.

Good Points:Combination of RTS and RPG.Armies can be built rather faster than in any other rts game.They dont require extreme numbers of resources.Great action included.Able to guide the army even in Hero Mode(when you control the hero from a third person view,RPG in other words)

Bad Points:A.I could be better.There is not a great variety of skills and powers among the heroes.The campaigns also are rather short and boring at some levels.They favor army building and city building rather than Hero command or battles.

Synopsis:An extremely interesting game.The drawbacks have minor value in my opinion.This game can be very addictive.The combination of RPG and RTS is the best part in the whole game but unfortunately in the campaigns its the only "perfect" part. 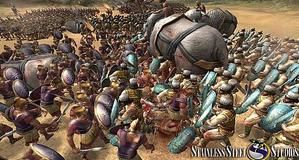