Due for official release sometime in early 2017, more and more players are gaining beta access to Rising Storm 2: VIETNAM with each subsequent Close Beta update.

Tripwire and Antimatter Games revealed the first gameplay trailer for Rising Storm 2: Vietnam at the PC Gamer Weekender event that took place in London over the weekend.

Outside of this Vietnam based multiplayer shooter, Tripwire Interactive are also working on taking Killing Floor 2 out of early access for a full launch. 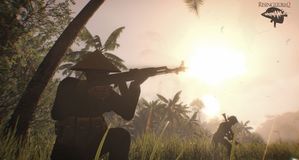