Gearbox Software's shooter Aliens: Colonial Marines for SEGA appears to have outsourced some of its project to Section 8 developer TimeGate Studios.

This has been hinted at before but Gearbox boss Randy Pitchford wouldn't reveal specifics. A job ad for TimeGate mentioned level design and the user interface.

TimeGate have just announced that they have unlocked a brand new mode for their downloadable multiplayer-focused shooter, Section 8: Prejudice.

TimeGate told the Section 8 community that it had to reach 10 million kills across all platforms in order unlock the new 'Assault' mode.

SouthPeak have announced Section 8: Prejudice but didn't mention on what platforms it world arrive although Xbox 360, PS3 and PC are likely.

A debut trailer for Prejudice has gone up lecturing us on evolution and war and how it never changes, hmm - that sound bite sounds familiar. 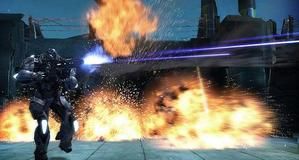