Cliffhanger Productions has announced their first update for the newly launched Shadowrun Chronicles: Boston Lockdown. The team have focused on 'balance changes' to items and characters.

They're also giving away a goodie-bag to "make up for the inconvenience" players endured in the first week. This includes an additional character slot and two unique bioware items not available otherwise.

The Early Access days are over for Shadowrun Chronicles - Boston Lockdown as it embraces its cyberpunk destiny and releases for PC, Mac and Linux today. It can be run solo or co-operatively.

Cliffhanger Productions brings us this turn-based slice of the inevitable future. The campaign supports single-player, and we can create our own "level-free" character, and assemble a team of Runners.

Nordic Games and Cliffhanger Productions, who recently announced they were partnering up to release the final version of early access title Shadowrun Online, have revealed a name change for the cyberpunk fantasy MMO.

It's now going to be known as Shadowrun Chronicles: Boston Lockdown, a title chosen by the game's community and Kickstarter backers.

Nordic will distribute Shadowrun Online when it leaves early access

The team-based tactical RPG is currently available through Steam Early Access, but when it's fully released later this year Nordic will handle the distribution.

Cliffhanger has revealed how the separate free-to-play and "campaign" (read as: premium) tiers would operate in the upcoming Shadowrun Online MMO. 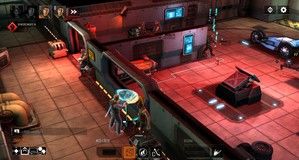