Instead of screaming "Boom Head Show", Sniper: Ghost Warrior will make you scream “why, why, why?" (PC, Xbox 360)

The pre-upshot:
Sniper: Ghost Warrior still goes alongside the rumors and my own opinion and forecast;

It's all show and no substance.

Graphics:
The game looks great and has superior light- and shadow-effects, no doubt about it.

It's in my humble opinion on the same level like OF:DR², CoD4 – a little bit more than BF².
But it appears to be a bit delicately – don't know how to convey it.
It doesn't seems to be robust and full-fledged like 'Call of Duty 4: Modern Warfare'.
There are often skippin' textures, flickering and stuff like that (which it's not driver/graphic-cards dependent).

AI:
One word; Measly.
The AI is disastrous, it's simply inexistent.
There are unbelievable scenes and things which aren't acceptable.

Bugs/Gameplay:
You care for an example?
The situation:
I tried several times to invade and cross a village while remaining undiscovered, so far the plan.
Notwithstanding the grass is about 3 feet tall and i prone in my almost magical 'Special SpecOps Marksmen Sniper camouflage suit' – which is pretty cool and a soldiers dream to look at it – i got a headshot from 800 meters for free.

So i decide to make the Rambo.
I went to engage the village with all the firepower i got, and as obvious and loud as possible.
In the end, you probably guess it;
I watch in awe two enemies shootin' – for whatever sake ?! – a freakin stone and foist the stones dead?
I knifed both.
Any questions ?

In general the AI gets and hits you, wherever and behinds whatever cover you are – mostly with a headshot.

Stealth-Meter:
It makes no difference if you're well covered in endless-tall grass or behind the thickest wall, or if you're roam freely on the highest exposed places.
The Cover-Meter (witch is [at best] useless) indicates me on the first situation i was exposed and on the other hand i was nearly invisible.

Freely exposed while hidin' hundreds of meters away in grass or behind walls.
And virtual unseeable staying on-top of a HMMWV
while shootin' at an enemy just a footstep away.

No further questions, Your Honour.

Performance:
The performance is abysmal.
The graphic is, let's say, 2008's measures adapted and meets barely todays standards.
But the for this purpose needed performance and processing power, speechless.

And no, i didn't forgot the multiplayer.
It's just not worth mentioning.

My conclusion:
Sniper: Ghost Warrior joins seamlessly todays line-up of games which got nice graphics but crappy and buggy gameplay/AI/whatsoever.

From this point of view, it's dure but true, S:GW puts itself on the same level as SC:C, CoD:BO, OF:DR² and so on.

All that glimmers isn't gold. 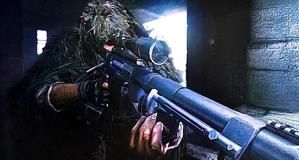