The Tencent investment will not affect Yager's corporate structure and leadership, the studio continuing to operate independently.

While 2012's Spec Ops: The Line was a hit with critics and a subset of fans, it never really found its feet amongst the mainstream audience.

So it's perhaps not too surprising that developer Yager Entertainment has ruled out developing a sequel, or indeed any similar military shooter, in a recent interview with German site Gamestar.

Spec Ops: The Line developer Yager have signed on the dotted line to use Epic's new fancy Unreal Engine 4 technology for a "major next-generation title" that will be unveiled in "the coming months."

Back in August a Yager designer teased they were working on something big but hinted that Spec Ops' lacklustre sales meant a sequel wasn't a likely candidate. UE4 "hands down" the best.

The online component for Spec Ops: The Line seriously irks lead designer Cory Davis from developer Yager because it's something the team didn't want, and was in fact handled by another studio.

2K Games "was relentless" in securing multiplayer made it in despite being "literally a check box" feature. Online was "never a focus" and game mechanics "were raped" to fit in multiplayer. 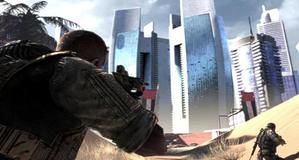