Prepare to be very scared.

Stasis developer promises to "blow people's minds" with next game

In November 2013, Indie developer Christopher Bischoff launched a Kickstarter for what would be a very successful point and click adventure game, Stasis. The game was launched on 31st August, 2015 to critical praise, and now Bischoff is promising to "blow people's minds" with his next title; Cayne.

Indie developer Christopher Bischoff has re-imagined Fallout 4 as an isometric, top-down RPG in the classic style, and it looks really, really good. I mean, I'm as excited for the first-person version as anyone, but this makes me feel a nostalgic desire to return to Fallout 2.

Bischoff's studio The Brotherhood has just released point-and-click isometric horror Stasis, which he says was directly inspired by the early Fallout games.

Isometric point and click adventure Stasis is out very soon, and developer The Brotherhood has released a brand new trailer to get us in the mood for its blend of moody horror.

The game's set on a seemingly abandoned spacecraft, where astronaut John Maracheck awakes from stasis sleep and discovers lots and lots of dead things. I'm sure everything's fine, though. 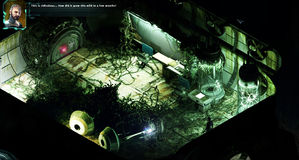