This game earns the name extreme, from the maps to the enemies to the combat. Even the map building is extreme, particularly if you’re the rabbit.

Firefly to reveal Stronghold Crusader 2 at E3 next week

Castle building addicts will have something to look forward to next week as Firefly Studios has revealed Stronghold Crusader 2 will be sieging E3 in Los Angeles. It would appear it will be limited to the press however.

They'll be showcasing the all-new visuals, battle interface, units and AI. Firefly have promised it will be sticking to the original's "epic fast-paced skirmish gameplay" with plenty of new goodies.

Firefly Studios has announced that the HD re-releases of Stronghold and Stronghold Crusader will be launching the first of next month. They have been remastered to support 2560x1600 resolutions. 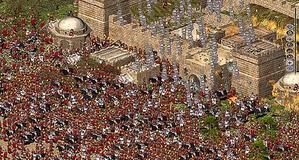