Styx sequel set for release in 2016

Focus Home Interactive and Cyanide Studios have announced a follow-up to the somewhat surprisingly well-received stealth game Styx: Master of Shadows. We didn't really get on with it, but apparently some people did.

Coming in 2016, Styx: Shards of Darkness is a sequel that promises a bigger budget, reworked movement and animations for goblin infiltrator Styx himself, and a move over to the Unreal Engine 4.

Stealth, stabbing and a spot of vomiting in latest Styx: Master of Shadows gameplay trailer

This latest four minute gameplay video for Styx: Master of Shadows is entitled 'Assassin's Green 2". Which is not a particularly good pun, but the comparison does at least seem accurate.

Goblin anti-hero Styx uses parkour, neat gadgets and an unhealthy amount of violent stabbing to get to the top of the Tower of Akenash and discover his origins.

Watch 15 minutes of gameplay footage from Styx: Master of Shadows

The gameplay video was originally shown off at E3 2014 at the start of the month.

More real-time strategic armchairing is on the way as Eugen Systems is developing Act of Aggression, announces Focus Home in their GDC line-up. It will debut next week to press at their GDC booth.

The very first video of Cyanide Studio's upcoming stealth game Styx: Master of Shadows has just been released, teasing the goblin anti-hero, assassin and occasional thief as he ascends the Tower of Akenash.

Cyanide use this teaser as brief glimpse at Styx's abilities and talents in the art of stealth infiltration. It's a stealth action title for PC, Xbox One and PS4. 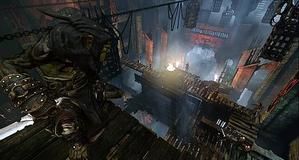