King Art Games has pushed back the release date of fantasy sequel The Book of Unwritten Tales 2 ever so slightly, with the point-and-click adventure now set for February 20 rather than the original date of January 30.

A light-hearted romp through the colourful world of Aventásia, The Book of Unwritten Tales 2 sees the return of adventurous foursome Wilbur, Ivo, Nate and Critter.

KING Art Games' The Book of Unwritten Tales 2 adventure has received over $65,000 in pledges in less than 30 hours, leaving quite the trail ahead with 38 days to go before the campaign wraps up and cashes in.

The project itself was actually already funded by Nordic Games, but KING Art want this opportunity to put stuff in they'd always wanted too but couldn't because of the risks.

The Book of Unwritten Tales 2 Essentials 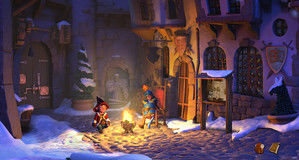