Near-masterpiece, absolutely phenomenal achievement for Bethesda, and no-doubt the best game on the PC in 2006, if not all formats.

All of Bethesda's franchises will be added to Xbox Game Pass and its PC version following Microsoft's acquisition of ZeniMax Media.

The officially-sanctioned Elder Scrolls cookbook won't be fueling this year's festivities, but it sure does look worth the wait.

After more than 5 years in development, we're still no closer to having a release date for the incredibly ambitious Skyblivion mod - but at least we're still getting updates.

It's been 10 years since the release of The Elder Scrolls IV: Oblivion. And while Bethesda will likely support Skyrim in one way or another for years to come, it's up to the fans to bring Oblivion back to the modern age. And this new teaser shows they're still hard at work. 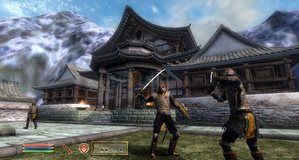