Is the console version of EA's PC behemoth finally a worthwhile port?

The Sims 3: Into The Future announced, features time-travel with 'consequences'

In a shocking twist sure to have your beverage of choice sprayed all over the screen, EA has announced another expansion for The Sims 3. This time it's, well, actually it's about time itself.

Apparently The Sims have discovered time-travel, so make sure your Sims work some overtime to afford that jetpacked, hoverboarding lifestyle you've been dreaming off for them. 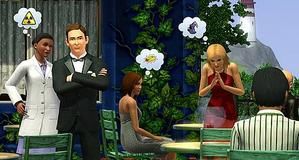