The Sims get Medieval in this very interesting addition to the franchise...

Electronic Arts has announced in a press release that The Sims Medieval: Pirates and Nobles is now available in North America. The game is an expansion to The Sims Medieval, and adds new quests, characters, heroes and, of course, pirates and nobles. The game also debuts a new storyline and an additional Kingdom Ambition.

Electronic Arts has announced in a press release that the first expansion to The Sims Medieval will be coming this August, and it'll allow players to live out piratical fantasies, or engage in sexy misadventures as a noble. The Sims Medieval: Pirates & Nobles adventure pack introduces players to new quests, treasure hunting, and hundreds of new objects for their medieval kingdom.

Crytek's Crysis 2 has taken the number one spot in the UK all formats chart, and is closely followed by TT Games' LEGO Star Wars III: The Clone Wars.

The second developer "webisode" for The Sims Medieval has been released, showing off the art and sound design, which serves to give the game its own unique style.

The first official trailer for The Sims Medieval has been released by Electronic Arts, and it captures the spirit of the game perfectly. 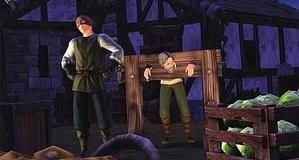