The Wolf Among Us Episode 2: Smoke & Mirrors Summary

The Wolf Among Us Episode 2: Smoke & Mirrors Review

Chris Capel huffs and puffs and blows Telltale's house in... to get the new WAU episode at last.

Telltale Games has released a teaser image for the next episode of The Wolf Among Us, their Fables adventure game, and it seems like Bigby Wolf might be having another bad day.

The shot shows the detective in full wolf mode, which we can expect to see in the flesh when episode three, The Crooked Mile, launches in the next month or so. 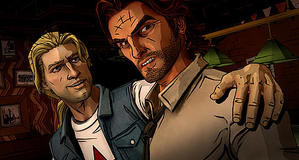