A last-minute reveal by Ubisoft announces Tom Clancy's Ghost Recon Wildlands which has the elite unit focusing on the narcotic empire across Bolivia. It's a military shooter set in a "massive and responsive open world".

It can be played in four-player co-op or solo on PC and console. The Santa Blanca drug cartel is our target which has turned Bolivia into a 'narco-state' with rampant lawlessness. We're there to correct that.

Two years after their closure, the founders of GRIN, best known for developing Tom Clancy's Ghost Recon Advanced Warfighter for the PC, blames Square-Enix for their demise. Co-founders Ulf and Bo Andersson stated Square-Enix not only made ridiculous demands of the firm, but it also reneged on $20 million contract for an unreleased Final Fantasy spin-off game which was codenamed Fortress, while demanding GRIN fax it the game’s code and music files.

A survey from publisher Ubisoft asked "what is the most important factor" that'll convince you to go watch a movie based on the Ghost Recon series.

It also asked the same of the Assassin's Creed franchise, which has sort of cheated a bit considering it already has a short movie under its belt. 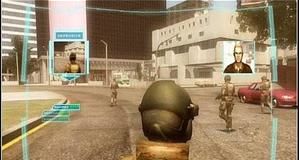