The latest Unreal Tournament game that has been in development for the past two years has a new map for players to play.

The last Unreal Tournament game (UT3) was released back in November 2007. While UT3 was received quite well by the games press, the game didn’t sell as well as Epic would’ve hoped.

The new reboot of Unreal Tournament has been in Early Access for the past two years, and Epic Games has released their third developer diary in the "Making of Titan Pass" series, which shows how the remake of CTF-Outside went from a sketch on a piece of paper to a fully realized, beautiful map.

For the first two developer diaries, check out Part 1 and Part 2.

Just in time for Halloween, a new update has been announced for Unreal Tournament featuring a ton of ghoulish content updates. The biggest addition on the card is the Spooky Face map, which is a Halloween rework of the classic Facing Worlds map. In addition, there are several collectible leader hats and a mask which will remain usable permanently once a player has earned it.

The collaborative project has been opened up in the last few weeks by the announcement that the Unreal Engine 4 tools are now freely available for everyone. Well, as long as you pay Epic a 5% cut of all your sales, that is. 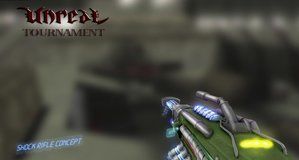