DoW consists of a single player campaign, skirmish mode & the ubiquitous online mode, in addition there is an Army Painter section...

Relic "doing some rethinking" about Warhammer 40K: Dawn of War 3

Developer Relic is working on Company of Heroes 2, which means there's little time for a full production of the next Warhammer 40K: Dawn of War instalment, but that's okay.

The studio are "doing some rethinking" about how they approach RTS; what's the "best way to present" the strategy genre? There'll definitely be more "RTS 40k stuff," says Danny Bilson. 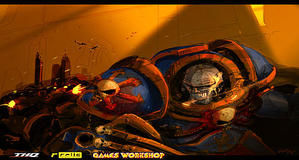