CEO Fredrik Wester of Paradox Interactive will be hosting a "live streaming demo" of the empire building strategy title from developer Ino-Co, Warlock: Master of the Arcane.

It will be gracing the Internet with its presence tomorrow, April 26th, at 11am PDT / 8pm CEST. It's a turn-based strategy set in a fantasy world, where players must unite and protect.

Bringing you the latest from sunny Sweden.

Warlock: Master of the Arcane Essentials 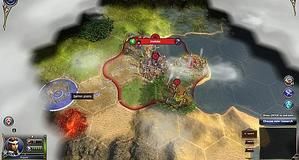