Everybody knows that the best kind of kill is the chain-kill, and the recently released cel-shaded arcade shooter Wrack is packed to the brim with them.

Along with the very promising Toxikk, it's part of what seems like a slight shift back towards the classic arena shooter that ruled the roost in before crouching behind cover and... aiming at people became the cool new thing. 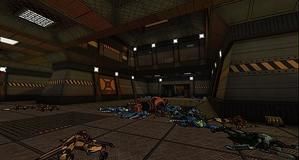