With a wide range of quality PC gaming accessories hitting the market including keyboards, mice, headsets and now other accessories, Element Gaming is fast becoming one of the top hardware brands to watch for core PC gamers – and we got a change to check out two of their latest – a great-looking new triple-monitor desk mount and a nifty new fan controller device for 5.25” hardware bays.

A first glance at Element Gaming’s new desk mount inside the packaging filled us with concern – it looks, to be honest, a little bit daunting. There’s an absolute tonne of hefty-feeling metal parts and a large selection of differently sized Allen tools provided in the box – it all looks rather complicated.

The good news is that it actually isn’t anywhere near as threatening as it first appears. The thick base casts a wide footprint on your desk, but mercifully is only around half a centimetre tall, meaning it doesn’t disrupt most of the desk. Its black-painted surface is sleek-looking and looks like it’ll take wear and tear well.

After about twenty minutes of fiddling, we had the main pillar of the monitor stand in place with the first of our 22” screens attached. For work purposes, that size monitor tends to suit us just fine – but the Element Gaming stand fits monitors up to 28” in size – and at those sizes and below, will happily support three of them.

The central pole mount is sturdy feeling, while the thick metal arms that attach to either side of it to hold the far left and right monitors feel even more so. There’s a joke here somewhere about the quality of British workmanship, especially if you’re familiar with the quality of some of our ‘classic’ cars, but this British-made mount feels great - I had no issue attaching a couple of hundred pounds worth of monitors to this – and the design is actually built as such that it can easily be moved – simply lifting the central pole can remove it from the base, even with the monitors attached, making it easy to move if you’ve got somebody to help. 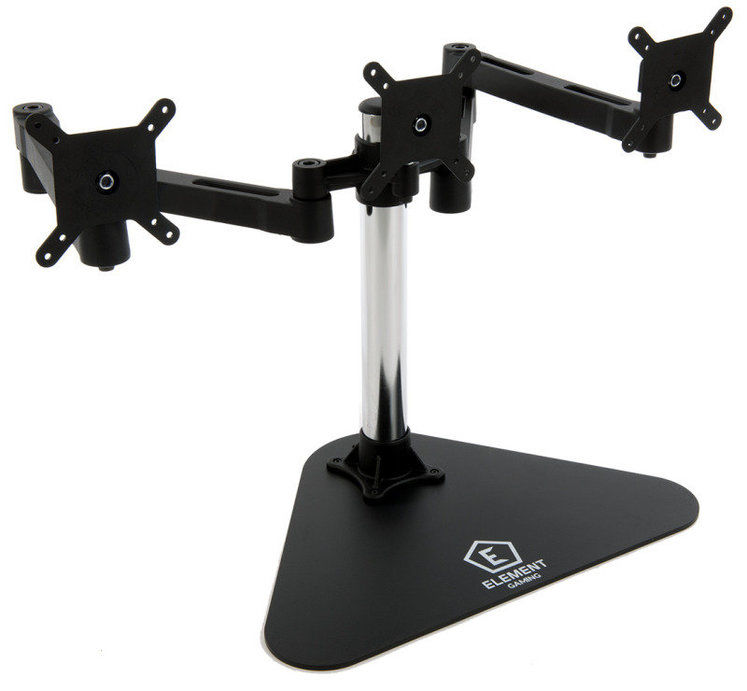 In general, this desk mount is one you’ll want to look at with a second person nearby – the components are rather heavy, and are doubly so with two or three monitors attached. The process of tightening up each of the desk mount’s joints with the provided Allen keys isn’t really a difficult one, but it is one you’ll likely want assistance with to keep everything balanced.

Once those joints are tightened, however, this is a hell of a desk mount. There’s a decent amount of articulation in the joints so that monitors can be made to look how you want, and they can be stored horizontally or vertically and at a variety of heights – but sadly only at one height across all three monitors. A welcome touch is that monitors can still be adjusted slightly even when the mount is fully tightened.

The ‘floating’ look for the second and third monitors looks great from the front and actually gives you more desk space as a result, and the biggest benefit of all is that as a free-standing mount, this doesn’t require any drilling or clamping that could damage your desk. 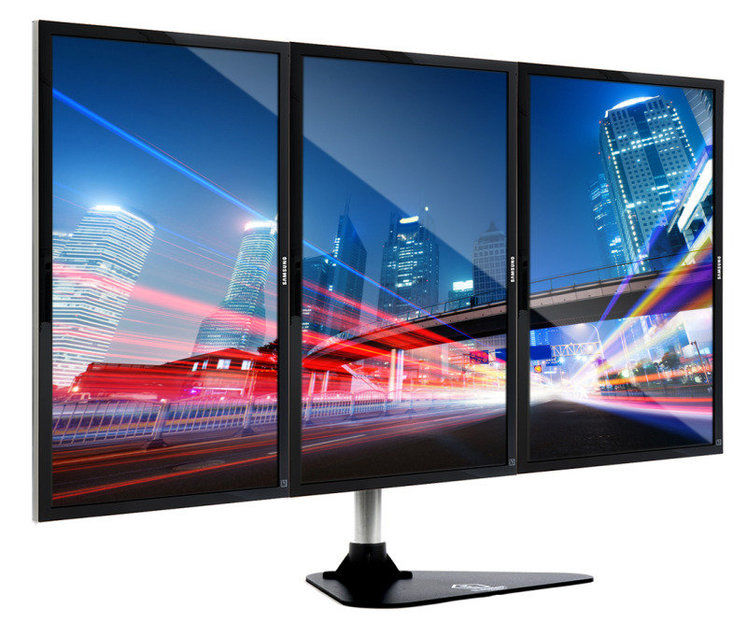 If you’re after a new solution for your multi-monitor setup, this comes recommended. It’s available now via eBuyer and Amazon.

Many motherboards these days come with functionality to control your fans via hardware, or to let the board handle fan speed - and with that, noise – itself based on the internal temperature of the PC. Some, however, might want more control – and Element Gaming has that covered.

Designed to slot into a 5.25 inch drive bay on the front of your PC unit, this fan controller manages to keep a competitive price compared to its peers with one small additional gimmick – the interface of the controller comes in the form of an LED screen with some rudimentary touch-screen technology attached.

When being fitted, the Fan Controller comes with four temperature measuring devices that can be stationed around the case to read the temperature throughout. With the front of the device being a screen, the device can report back to you in real time your PC’s temperature status – and you can then use one of the twelve touch points on the screen to boost or lower the speed and power of fans at your leisure.

The device supports up to four fans with three or four pin inputs – which might well be enough for most users, but might disappoint the extreme hardcore – which may well be quite a cross-over with the audience it’s aiming to hit. In addition to the fan inputs, this will also require direct power from your PSU via a standard molex cable.

In use, the device does its job quite well – the touch screen is a basic one – as you’d expect for the price – but is responsive to touch, with fan speeds and voltage easily adjustable. The temperatures read also appeared accurate based on tests and benchmarks we ran. One cute additional feature is an alarm that goes off when a fan isn’t functioning as it should for one reason or another, such as a mechanical failure or a blockage – and this alarm can also be configured to go off when temperatures exceed a maximum or minimum level set by the user – features for the power-users out there.

The Element Gaming Touch Fan Controller is a well-designed and great-functioning product – I’m just not entirely sure who it’s for. While I can recommend the desk mount whole heartedly to anyone, this is one device that has its recommendation dependent entirely on your needs – if you like to micro-manage your fan speeds and PC temperature, however, this device does so well, and looks sleek while doing so. It’s currently available in the UK via eBuyer.