PC cases are a difficult thing to write about. After all, so much of what drives a person to pick a particular case is down to aesthetics - and that’s good-looking to us may well be quite the opposite to you. One place where it’s easier to make an absolute judgement is in the minimal – and if you’re looking for a more simplistic looking case with less extraneous, Fractal may well have the case for you in their new Define R5. 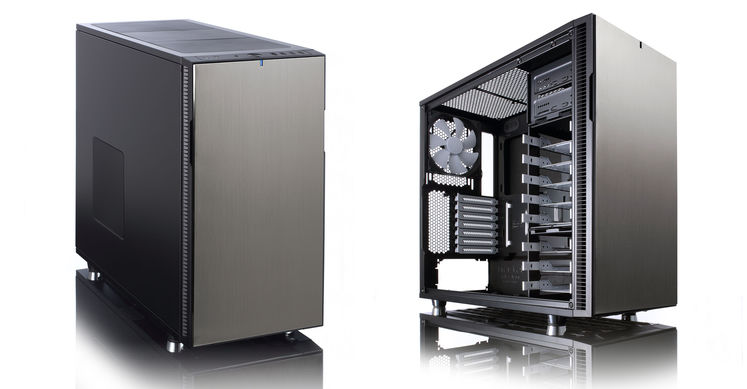 The Define R5's minimalist design sets it apart from many performance cases.

Available in three colours – Black (tested), White and Titanium, the Define R5 is the latest enclosure from the company and features an Apple-evocative simplicity to its design. With sleek, smooth edges and a basic, boxy shape, it somehow manages to outstrip many of its rivals in looks – and the story inside the case isn’t much different, where it’s rich with features to make cable routing easy and internals neat.

Before we go into detail on my experiences with the case, let’s kick off with the Define R5’s key specs:

With that out of the way, I’ll kick off with my favourite thing by far about the Define R5 – its form factor. We decided to switch the resident Game Watcher test PC build that we use for Benchmarking into the R5 and found the process a joy, mainly due to some incredibly smart decisions in how the case is designed.

One of the first things that’ll strike anybody upon touching the case is how thick and sturdy all parts feel. Removing the side panels on most cases reveals them as flimsy sheet metal, but on the R5 they feel thick, bulky and also come lined with sound-absorbing material. Obviously our recommendation is always to buy coolers, fans and GPUs that perform well without generating a lot of noise, but the choice Fractal has made here is one that’ll benefit even those who aren’t so exacting in their other choices – the padding goes a huge way to reducing the amount of noise audible outside the case, even with the loudest fans we could find installed. 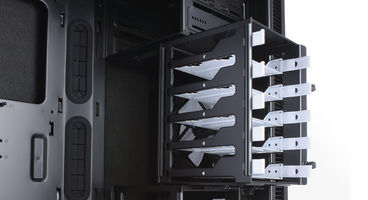 Padding is all over on the R5, right down to its heavily padded silver-coloured feet – and those too help to ensure any potential rattle against a wooden floor won’t happen, while also keeping a few millimetres of clearance off the floor to allow air-flow from the bottom of the case.

Speaking of air flow, that’s well-designed here too. At the front of the unit there’s space for two 120mm or 140mm fans, with one 140mm fan from Fractal’s range coming pre-installed. A dust filter slides into place at the front of the case to prevent too much dust flow even when the case’s front door is open. While the dust filter perplexingly can’t be screwed into place and merely clips, it does so sturdily and without issue, and we didn’t encounter any issues with vibrations on our test unit.

At the rear, also pre-installed, is one more 140mm fan. As noted above, there’s also entirely optional space for three fans at the top of the case, one on the side, and a further two at the bottom. Each of these fan-holes is covered in the slick design with a flush cover that matches the rest of the case – but if more air-flow is your priority, these panels can be removed to allow for fans to be put in their place. The top fan set-up can also be fitted with water cooling solutions if that’s your personal preference.

As with the front fans, a second dust filter sits in place beneath the bottom fans. Both filters are easily removable, though the dust filter that sits at the bottom of the case will require you to at least lift and tilt the case to reach. It’s also the most flimsy aspect of the case when removed – so be sure to put it aside safely so it’s not stepped on or anything of the sort while fitting it. Strangely, the top of the case features no filter – which seems a glaring omission of a sort. 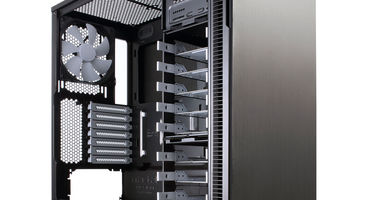 Setting up fans of course means running a fair number of cables, and in this the Define R5 also does a stellar job. There’s anywhere between 20 and 35mm of clear space for cable routing behind the case’s motherboard plate depending on which area of the case you’re routing around, and well-placed holes throughout the case to route cables from one side to the other.

On the rear of the motherboard plate are also small ruts in the case that come with Velcro straps attached – the simple idea being you wrap cables in these Velcro straps, when are themselves then attached to the ruts. It’s very easy to accomplish some incredibly neat cable management in this case. Also found around here are the two dedicated 2.5” SSD bays – they’re a bit of a tight fit, and sadly aren’t tool-free for setup, but also fit quite well.

In fact, none of the drive bays, even on the other side, are tool-free. While this is a very neat case, if you’re the type of person who likes to hot-swap drives on a regular basis, you’re not going to find yourself doing it with this case all too often. The drive trays come in the form of slightly flimsy-feeling trays of thin metal – which reduces the weight but still feel rather Spartan to me.

The door at the front of the case isn’t of the solid metal construction of the rest of the case, but is padded like the sides and made of thick enough plastic that it actually initially appears metal. Beneath you can find the 5.25” drive bays for disc drives or card readers, plus - in a particularly cool nod - a discretely-hidden fan speed controller hidden in the front of the case, so if you prefer manual control that’s completely possible.

For the price – around $110/£90 – the Fractal Design Define R5 offers a great quality case at a great value. It doesn’t have the largest footprint, but in spite of that it carries a hefty weight thanks to its sound-damping metal construction and has plenty of space to fit in larger PSUs and Graphics Cards, albeit at the cost of some fan space.

Minor issues with how space is used, fan placement and the air vent covers do bring the case down a tiny notch, but this is still without a doubt one of the nicest-looking and best-performing cases we’ve looked at. It’s pretty to look at, sure – but retailers it’s the functionality that really makes this case a success. Recommended.

The Fractal Design Define R5 is available now via like eBuyer and Amazon.