We talked with Hermann Peterscheck about Auto Assault

Strategy Informer: Auto Assault has been released for sometime now - how's it going?

Hermann Peterscheck: The launch went smoothly which was a relief, however, as with all MMOs, launching is only the beginning. We had many early hot fixes and updates to improve the game and a few weeks ago we had our first major update followed by a series of minor updates. There are constant changes and additions to items, quests, skills and so on and I imagine this will continue over the life of the project. We also have some major updates planned throughout the year which we will be revealing more about later.

Strategy Informer: Can you tell us about the latest update? What new content has been added?

Hermann Peterscheck: The first update was primarily the addition of content. Filling in mission gaps, adding creatures, items and so on. There were also some significant features such as loot linkingand character respec which our community was asking for. We're really trying to make an effort to listen to our players and give them what they want. We are starting to conduct poles in the patcher to try and help this effort and, of course, the message board is an excellent resource for this.

Strategy Informer: Do you get much time to play the game? What do you enjoy about it?

Hermann Peterscheck: Not nearly as much as I would like. It's a mixed blessing to work on a game. On the one had you get to decide what happens and you can kind of make what you want... on the other hand when you play the game you tend to see only the problems which interferes with the enjoyment. I actually think the thing I like best is talking to the players in the game and traveling around with them killing the tougher creatures in the game. It's great to watch people having fun and its even better to join them!


Strategy Informer: What's in the future for Auto Assault fans?

Hermann Peterscheck: It's so hard to answer this question. We literally have notebooks full of great ideas that have been thrown around. We obviously want to keep expanding the game but that is a very general statement. Games always have their strong and weak points and I feel that a few of AA's strong points are destructible environments and the fact that it is a driving game. We've had some criticism (valid criticism) about not doing enough with the fact that we are a "car game" as well as the fact that we are an item heavy game, but there is no auction house. I also think that the arena system could be a much more significant part of the game, so these are things we are looking at in the near term.

Strategy Informer: What comes to mind when someone mention's Auto Assault 2?

Hermann Peterscheck: Panic!! Seriously though, I have been working on AA for about 4 years now which is a large chunk of time to be so engrossed in one product. Having said that it is a dynamic product and so even though it is the same game, it changes enough that it is constantly involved and interesting. There are SO MANY things that I would love to take a stab at again and from that point of view doing a sequel or possibly a derivative product would be really great. I would however miss working on AA. This is all speculation of course... right now all my focus is on making AA as good as it can be.

Strategy Informer: Is there anything you'd like to say to the fans of Auto Assault before we wrap this up?

Hermann Peterscheck: I really think we have a great community. The developer/player relationship is a bizzare one in that it can become very adversarial. I don't know why this is; we both want the same thing: a great game with lots of people playing! I think that sometimes developers feel overwhelmed with the amount of work that an MMO requires to maintain and at the same time players get frustrated that their concerns are not being met fast enough. Both of these are true and in that sense no one is at fault for when these situations occur... I feel like part of my job is to make sure everyone understands where everyone else is coming from. I like that our players are vocal and honest. If something isn't right, we hear about it, and we should. However when we do something they like we hear it as well, which is a great beacon. An MMO is nothing without the players... moreso than any other kind of game, so I am very appreciative to have people that play the game and enjoy it. It's also nice when people feel a sense of ownership of the game and help guide us in what could make the game better and when we make it worse. 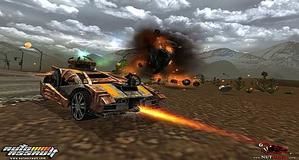