We borrowed some time from Simon Egenfeldt-Nielsen, the CEO of Serious Games Interactive, to discuss the Global Conflicts: Palestine

Strategy Informer: Please introduce yourself to our readers.

Strategy Informer: What is Global Conflicts: Palestine gameplay about?

Simon Egenfeldt-Nielsen: It is really quite simple to make it accessible for all type of gamers. You play a rookie journalist that arrives in Jerusalem, the tormented heart of the conflict. You then get different assignments that you need to solve by finding sources and gaining their trust. In that sense it has a lot of the good-old fashion text-adventure but with a few twists. Depending on what side of the story you choose to cover and what parts, there will be consequences for you. The quality and relevants of your quotes and story will lead to a more or less successful story that will impact your journalist level and that's how you move on in the game. I want to stress though that while this game prompts reflection, the main objective of the game is enjoyment and most gamers that have tried the game have really enjoyed their experience because it is different than a lot of games out there.

Strategy Informer: How big is the world of Global Conflicts: Palestine?

Simon Egenfeldt-Nielsen: It is fairly limited. It has Jerusalem, a Palestinian city, a settlement and a small village. It probably takes something like 5 minutes to run from one end to the other.

Strategy Informer: What made you decide to build this kind of game?

Simon Egenfeldt-Nielsen: It was really quite a mix. We wanted to make a serious games that appealed to both non-gamers, gamers and educators ­ something that had an agenda beyond entertainment and could show that games can do more that the mainstream game industry suggests. We thought global conflicts would work really well, and looking at the conflicts around the globe, one really stood out. The Israeli-Palestinian conflict seems to go on and on, attracting a lot of people's attention. Many is interested but only get to the quick fixes from newspapers and television. We thought that through the game we could reach people in a different and engaging way that would give people a better understanding of the conflict while not being bored or overwhelmed by the complexity. Also, we really felt that the conflict had a lot of interesting and suitable conflicts that could work in the game environment and setup that we envisioned early on.

Strategy Informer: The news of Global Conflicts: Palestine game was recently published by global news networks such as CNN and BBC. How did the game development team received news of such extraordinary coverage?

Simon Egenfeldt-Nielsen: Well, obviously we were very excited because this is exactly what we want to acheive - to broaden the perception of games and reach out to new groups of people. With such strong mainstream press it should really be possible, and it shows that games are no longer a mere niche.

Strategy Informer: When was the game released?

Simon Egenfeldt-Nielsen: It was launched on the 5th of July 2007 and can be obtain on www.gamersgate.com among other places.

Strategy Informer: What minimum and recommended system specs does the game have?

Simon Egenfeldt-Nielsen: To make the game really accessible we have quite low requirements, any 3D graphics accelerated card should really do it, although the graphic quality may of course suffer slightly.

Display must be at least 1024 x 768 pixels for the game to be displayed correctly. 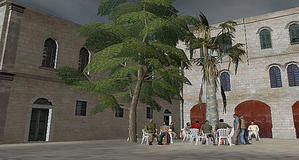