We talk to Creative Director, Andrew Spearin, about Insurgency: Sandstorm

I attended the What’s Next de Focus event last week and had the opportunity to talk to some of the team that are working on Insurgency: Sandstorm. Unfortunately, the game was not available to play at the event so please bear that in mind when reading this interview.

I had the chance to sit down and have a chat with Andrew Spearin, Creative Director at New World Interactive. We spoke about what Insurgency: Sandstorm is, what problems the New World Interactive encountered in early development, and how the developers are managing to compete with some of the biggest FPS’ out there.

GameWatcher: Can you give us a brief overview of your game?

Andrew Spearin: Insurgency: Sandstorm is the sequel to our game, Insurgency. It’s coming to the PlayStation 4, Xbox One and PC (on Steam). There will be a Closed Alpha later this year, with the full launch taking place in 2018. Insurgency: Sandstorm is a first-person shooter set in the Middle East which has been inspired by current events, and is by no means a simulation. We have placed a great emphasis on multiplayer gameplay by bringing in lots of competitive and e-sports features to the game. In addition to that we are also bringing a single player component based on a very serious narrative, inspired by real characters and real events.

GameWatcher: What do you think is different about this game compared to other games in the genre?

Andrew Spearin: Most shooters are very forgiving when it comes to game mechanics, or even the user interface design that tells you when you’ve killed someone and how many points you’ve got. Insurgency distinguishes itself from those other games by removing those elements and increasing the suspense and the thrill of combat with one hit kills. No player is a bullet-sponge, essentially. Typically, in a lot of shooters they have a hardcore mode; we’ve been pioneers in that hardcore shooter genre for over ten years. That is our purpose. 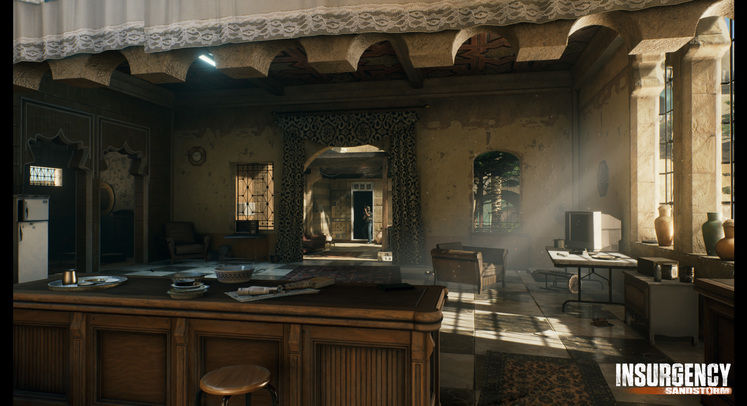 GameWatcher: Have you encountered any issues developing this game? If so, how did you overcome them?

Andrew Spearin: We’ve run into many challenges as a small indie developer, notably we launched a Kickstarter campaign that was unsuccessful in funding our project. We subsequently had to close down a small studio we had at the time and shift to an entirely remote team. Despite this, and probably because of this, we were able to develop the game in a leaner fashion than typical developers, yet still provide an alternative to those AAA developers. So, we have since launched into Early Access, where we’ve developed the game with the community’s feedback. The game has been on the market for over three years now with free content updates and over three million sales. We are bringing a lot of the lessons we’ve learned into Insurgency: Sandstorm to ensure that we have a successful launch.

GameWatcher: What made you want to switch from using the Source Engine to using Unreal Engine 4?

Andrew Spearin: Working with Unreal 4 is almost like night and day. Straight out of the box, Unreal 4 has a lot of support and looks amazing, so our artists and programmers are very thrilled to be working with it. We’ve been working with the Source Engine since the beginning but there’s a lot of community support out there for Unreal 4. It’s a different kind of business model from Valve’s perspective. They hesitate to license an engine because they don’t necessarily provide the kind of support that Epic will provide with Unreal 4. It’s kind of like a sink or swim deal where, with Source we had to learn a lot ourselves and follow Valve’s example, but with Unreal 4 that community support is there.

GameWatcher: What games inspired you to create Insurgency: Sandstorm?

Andrew Spearin: The original Insurgency mod was largely inspired by the Day of Defeat mod for Half Life. We are big fans of that World War 2 setting. That gameplay is what we wanted to bring into the contemporary era. I suppose another couple of inspirations from way back when would’ve been Tom Clancy’s Rainbow Six: Rogue Spear and also the original Ghost Recon - we enjoyed those games immensely. There are also a bunch of probably more obscure mods from that time. There was one called Infiltration, which I believe was like an Unreal Tournament 2K mod. That was the first time I experienced that free aim and zero crosshair where you just have to rely on your iron-sights. Another mod, called Hostile Intent, kind of had that hardcore gameplay, and that was a Half Life mod as well. There’s quite a lot of indie and mod projects that we’ve been inspired by, but a lot of our team members were also a part of those projects. We’ve kind of brought all of that experience together and bring it to the forefront of the gaming audience. It’s a really fun thing to do. 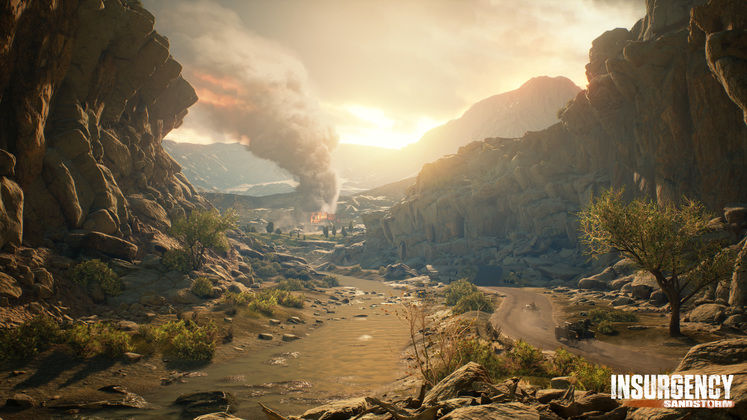 GameWatcher: Is VR something you would consider adding to this game? If not, have you at least thought about it for your future releases?

Andrew Spearin: We definitely looked at VR. We have a VR headset, but what you probably aren’t expecting to hear is that AR excites us more than VR. We haven’t really put that much thought into this particular game, but on a personal level, I have all sorts of ideas for VR, but we’ve got to make sure we get through this before we can move onto the next idea. As the tech develops and matures over the next few months and years, we’ll see that maybe it’s easier to support than not.

GameWatcher: Were you surprised by how popular Insurgency has become considering the other massive games out there like Counter Strike & Battlefield?

Andrew Spearin: I think a lot of people see those other, very popular shooters and are exhausted of the sequels year after year that give you the same thing with a different skin. They are looking for something new and fresh that is going to excite them again, like they did have with that game originally, so they can find that with Insurgency.

Insurgency: Sandstorm’s release date has not been announced right now, though you can still get in on the action if you use Steam. The original Insurgency game (the one released back in 2014) is available on Steam, giving you the opportunity to try it right now. Insurgency: Sandstorm will launch on PC, Xbox One and PlayStation 4.