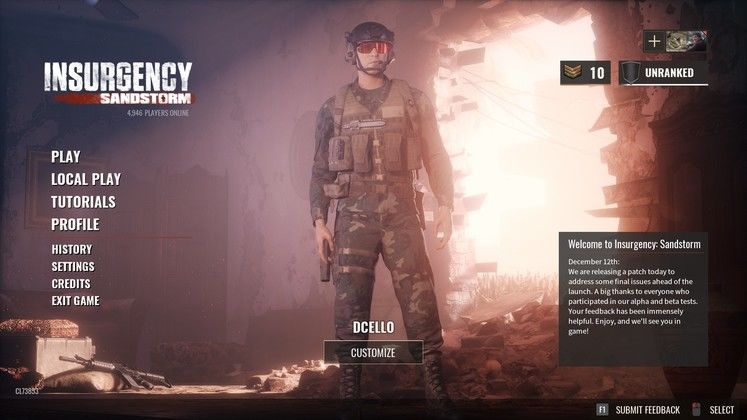 The main problem with “realistic” games is how boring they can be. Games like ArmA and Squad are rather enjoyable, but they are bloated with complexity and lulls in the action that often end up getting in the way of fun. Insurgency: Sandstorm straddles the gap between those games and mainstream shooters, creating an exciting and tactical experience that is just deep enough without being overly complex.

A co-op/PvP first person shooter, Insurgency follows the same molds of Battlefront by pitting two teams with multiple classes against each other on a battlefield littered with control points. The maps are largely linear and remarkably devoid of long open areas, encouraging close quarter combat and all but forbidding a constant effective use of snipers. 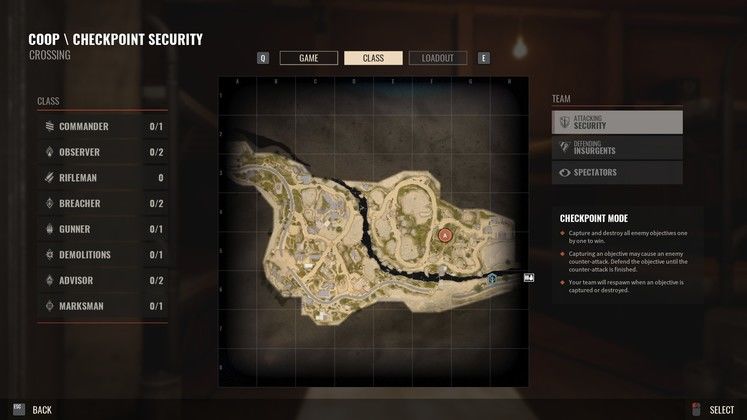 Unlike most shooters, the game has a strong focus on realism, featuring a brilliant and intuitive magazine system that allows you to quickly discard clips or store half-full ones for later use. It puts extra emphasis on ammo management, which is slightly mitigated by the lethality of encounters – enemies and players alike drop with a couple of rounds to the torso, incentivising the use of cover and peeking around corners and creating a more methodical approach to firefights.

The right word for combat in Insurgency is tactical. The close quarters and high enemy concentration foments engagements, but the deadliness of the weapons stop mindless running about a la Counter Strike. The end result is an enormous immediate impetus to clear an area and shoot the enemy before they shoot you, while being extremely careful to not move too quickly and expose yourself too much without necessity – also known as the basic principles of real life infantry combat. 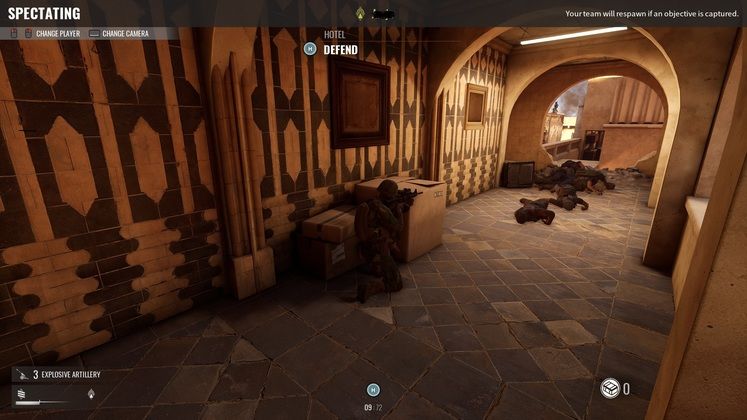 That would be fine on it’s own, but what really brings battles to life is the sound design. Weapons are weighty, explosions are deafening, and bullets ping and pop as they hit the environment around you, but it’s the soldiers that elevate the experience to a new level. There are constant automatic call outs on enemy position, warning shouts from spotting threats, and reaction comments when taking fire, alongside a manual order wheel to alert teammates or request support.

My favourite part of Insurgency, without a doubt, is the Commander role. Working alongside another player running the Observer class, the Commander calls out air support markers to observers, who then relay them to the station. The whole exchange is voiced, and if either party takes fire or gets interrupted, the request does not go through to command – station will literally ask the observer to repeat the request if it can’t be understood, which is done automatically and obviously prolongs the time until support arrives. It’s a brilliant small detail that adds an immeasurable amount of authenticity to proceedings. 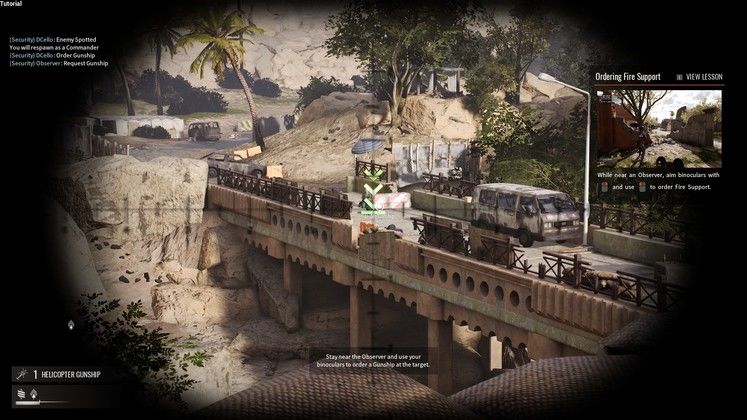 That unique experience successfully translates to both PvP and coop modes, though the latter is infinitely more enjoyable. While both modes require teamwork to win, PvP is subject to the toxicity, competitiveness, and lack of patience so widespread in every other game of this kind. On the other hand, Insurgency coop players seem to be more sociable and inherently work together, creating the feeling of being in a coordinated squad even when playing with randoms.

The coop community is also surprisingly easygoing and populous, and it never took me more than five seconds to find a full match even on Friday nights. Unfortunately, the handful of maps and a single measly game mode get old after just a few hours, and I can see the playerbase dropping sharply in the coming weeks unless coop gets a lot of love soon. 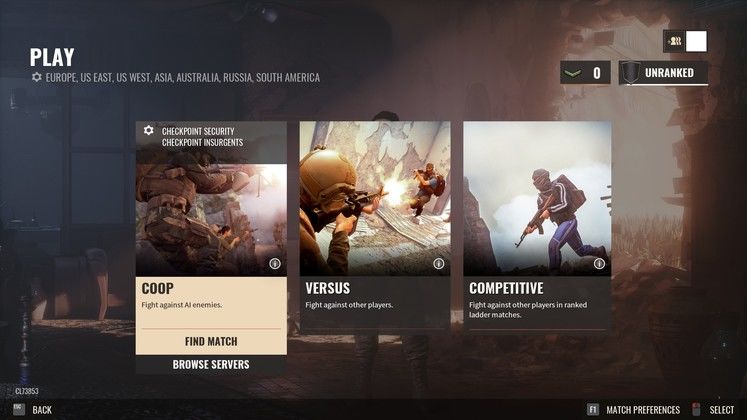 In fact, player retention may be one of Insurgency’s biggest challenges. The game’s current customisation system is workable, but very limited in both variety and gear options. It’s all made worse by the senseless decision to only rewards players a small amount of credits on level up and nowhere else, resulting is a grindy and unsatisfying progression system that feels akin to a free to play mobile title.

The loadout system, however, is more sensible. Players get full access to all attachments and weapons available to a class since the beginning – each with their own weight – and must choose their equipment based on how much they can carry. The system still needs a lot of adjustment – on assault rifles alone, the highly versatile and relatively light M4A1 weights more in-game than the bulkier and heavier FN FAL, which means you get a lesser choice of attachments in the weapon that is famously known as a very versatile platform. Even worse, the higher caliber of the FAL actually downs enemies quicker and more reliably than the 5.56 rounds of the M4A1, which means the FAL does more damage, weights less, and carries more attachments — making it effectively a better weapon in every single aspect. 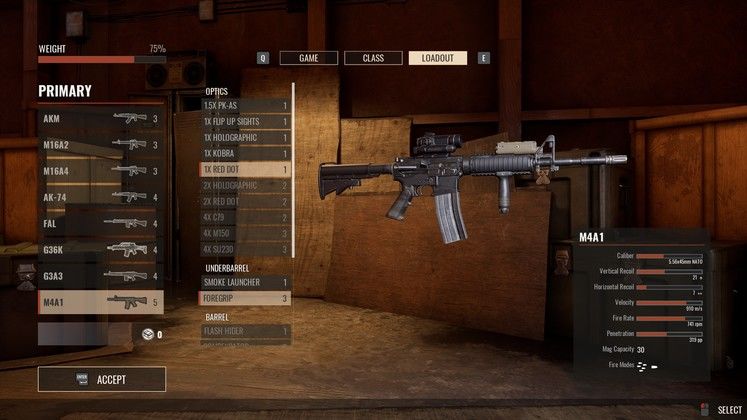 In fact, the loadout system is just part of the game’s greatest issue: Insurgency: Sandstorm is in dire need of a balancing pass. Pistols feel stronger than primary guns, maps have invisible walls preventing sniping positions of any kind, and weapons without foregrips are incapable of putting rounds reliably downrange, but none of those comes close to the absurdly bad hit detection in explosives and the AI’s aimbot capabilities.

RPGs and grenades can’t be used on windows, as the hit detection makes them bounce back and explode on you. Enemy mortars can wipe out your whole team even if you’re on the ground floor of a three-storey structure. Every single time I called in gunship support, I died to its missiles through walls while the rest of my team sat untouched a feet away from me. Add to that the AI’s horrendous capability to pull snap shots and kill you even when rotating 180 degrees or when their weapons are lowered and not aimed at you, the absolute unfailing accuracy of technical’s gunners, and the lack of proper warning and feedback with RPGs or grenades, and the end result is an unbelievably frustrating experience where players explode out of nowhere and feel cheated by perfect-aim one-shot, one-kill AI. 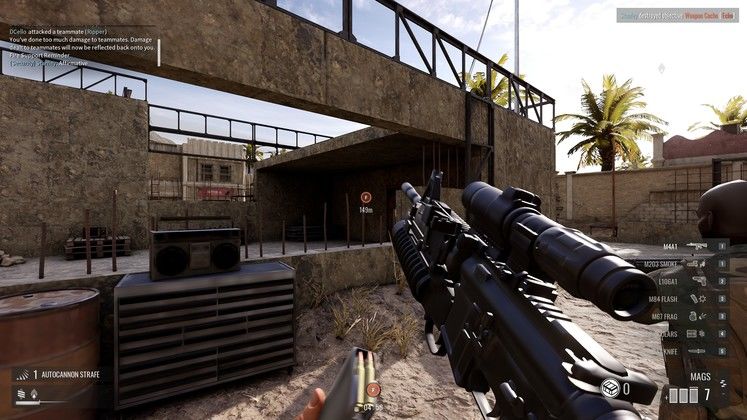 The end conclusion to draw from this is not that Insurgency is a bad game – in fact, it’s a really good game. It manages to grab the experience of being in a squad during war without all the setup and downtime of ArmA and Squad, which ultimately delivers a much more dynamic and fun experience. It’s got a few kinks to work out, but New World Interactive has a history of sticking with their games. Let’s just hope they don’t focus solely on the PvP crowd like Siege did and give some much needed love to coop – there’s a lot of potential in Insurgency and a highly invested playerbase at the moment, and it would be a shame to see it go to waste.

A very good game that needs some amount of balancing and polishing to really shine.

Taking out 14 insurgents with a single fire support call.