We take a seat with the head of Aterdux Entertainment, getting the lowdown on their upcoming gritty strategy RPG – Legends of Eisenwald

10 January 2014 | By Import
Self-described knight-errant simulator Legends of Eisenwald is an upcoming turn-based strategy from Belarus based developer Aterdux Entertainment. Taking inspiration from Disciples 2 and experience from the studio’s previous game – Discord Times – this new title aims to provide a chunky realistic fantasy experience in a world designed to be light on the clichés and heavy on the folklore. We got together with studio head Alexander Dergay to see what it is that makes Legends of Eisenwald a unique offering.

Strategy Informer: Can you tell us in your own words what Legends of Eisenwald is all about?

Alexander Dergay: It’s a mix of RPG and strategy, with a focus on the RPG side of things. The game centres on a rich story and features tactical turn-based combat, exploration, and some simple economic elements. We drew inspiration from games like Disciples 2 – how the units level up, how the world map is explored and the well-designed story-driven campaigns.

We wanted to create a medieval setting which was a grittier and a more real fantasy world; a place where superstitions of historic ages come to life. We don’t have the typical overblown fantastical things like fireballs, elves and orcs. Instead of that, the game is based on real-world folklore; things which people believed in medieval times like werewolves, vampires, witches, herbal healing, and so on.


Strategy Informer: Why did you decide to go for that kind of gaming universe?

Alexander Dergay: Most of us used to be heavily into live action role-playing. Here in Minsk we have several historical reconstruction clubs so for us it was kind of natural to go for a world based more in reality. We also got a little tired of all the clichés in fantasy settings – elves are thin and arrogant, dwarves are strong and short, and so on. There are too many games which have featured those things so we wanted to focus on something a little different.

Strategy Informer: The ethics in Legends of Eisenwald are also a little less black and white than the norm. Can you talk about that?

Alexander Dergay: Yes, one of the things that are equally overdone these days is that a hero has to save the world simply because he is a hero. We wanted something more human than that. For us, to achieve immersion into the gaming world you have to make it believable, so in our gaming world people are driven by realistic aspirations. Those would be things like the desire for revenge, for fame, for money, or wanting to rule. The game is a fantasy but it’s based on real historic motivations in a way which we think makes the world more immersive for the player.

Strategy Informer: Given that you’re focusing on a grittier and more folklore-based world, to what extent is magic featured?

Alexander Dergay: There is magic in the game but all our mages, so to speak, are units of support. So healers can do incantations to improve your characters will, for example, and there are some witches who can curse you. The magic we have is quite low-key, the kind of thing which could function based on real-world beliefs and superstitions. Equally the fantasy creatures in the game are based on historic lore.


Strategy Informer: Could you tell us a bit more about how the combat works?

Alexander Dergay: Our idea was to evolve the kind of combat in Disciples 2 and games like Heroes of Might and Magic. We wanted to make it not as long-lasting but still tactical and fun. So with our system we try to prevent empty moves – we constrain the player in some ways to force them to attack or make meaningful moves. In addition, our system has no randomness to it; everything can be calculated absolutely.

Another crucial difference with Legends of Eisenwald is that units are not stacked. You don’t have armies of hundreds of units occupying one tile. Instead, every unit on the battlefield is an individual fighter with a name, statistics, and equipment. Because of that you have a lot of scope for customisation, you can equip your units with the items that you want and then decide in what ways to upgrade them. Rather than a big military general with a massive army you are more like a knight commander with a small dispatch.

Strategy Informer: What kinds of modes of play will the game feature?

Alexander Dergay: To start with we will just feature campaign play. We’ve designed it in such a way as to give it replayability and make it non-linear; so with one play through you won’t experience everything the game has to offer. We estimate one playthrough from scratch will be around 30+ hours. We will be including a scenario editor at some point, although it is rather complex to use but we are very interested to see what our players will come up with.

I don’t want to give too much away about the story because we’re very happy with how it’s turning out and we don’t want to spoil anything. But basically it’s about a hero who returns home to find his lands in disarray and he has to find out what’s going on, why this has happened and who his enemies are and maybe go on to reach an understanding or seek revenge against them. Currently in our early access on Steam we have three playable chapters from the campaign.

Strategy Informer: What has been the biggest challenge design-wise?

Alexander Dergay: Well one thing is that we don’t have a single game designer; pretty much everyone in our company participates in the game design. We have two major schools of thought in our company which have conflicted with each other. One is a group of very serious gamers, and then there are people like me who like things not to be quite so hardcore and fun to play. So a big challenge has been reconciling and bringing together those two ways of thinking and finding a compromise between them. In the end I think that everyone is happy with how things are turning out.


Strategy Informer: Which part of the game do you personally enjoy the most?

Alexander Dergay: I really like the story and the immersion that we’ve been able to create. As a player you really feel motivated to go and explore and find-out about different parts of the world. I personally really like story-driven games, and I think that I’m very happy with how that has turned out.

Strategy Informer: Alex, thanks for your time, we’re looking forward to seeing the final release.

Legends of Eisenwald is currently available on Steam early access with the final release unscheduled but expected soon. 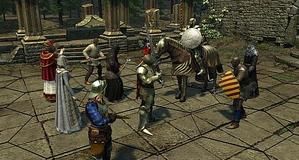