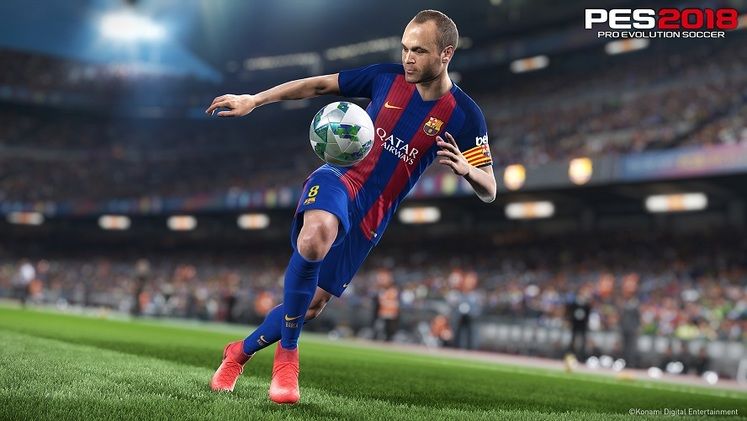 Pro Evolution Soccer is a series that has ebbed and waned in the spotlight of football simulators. It’s a competitive field nowadays with EA’s FIFA franchise finding its stride over the last few years and the former king slipped for a time, but Konami isn’t letting PES go away. It has the staff and the passion to push this series back towards its former glory and the last few years have been a stalwart stomp back towards the top of the hill. Pro Evolution Soccer 2018 intends to continue that trek and with the hands-on time we got with the game at E3, it’s standing to make a bold statement about who deserves the top spot in your library of football titles.

2017 may have left some things to be desired on PC, but 2018 is moving towards addressing all issues. Player behavior, ball control, movement, and the flow of the game in 2018 are set to remind players of why PES has been the other household name in football games for as long as it was. To get the scoop about what 2018 brings to the table, we caught up to Pro Evolution Soccer Brand Manager Andre Bronzoni to chat about the highlight additions to the franchise this year. Bronzoni took us to the pitch to talk in-depth about player behavior modeling, esports emphasis and modes, and the slew of fascinating changes set to make PES 2018 a step above its predacessors. 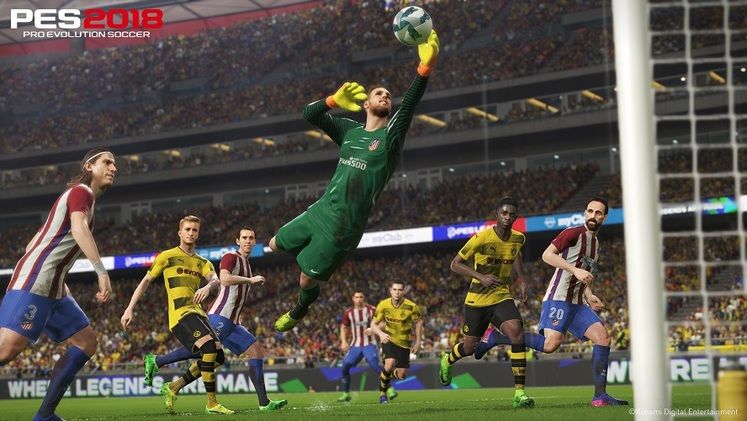 GameWatcher: PES has been on its way back to reclaiming the glory years and the team continues to try to drive the best football simulation out there. What were the goals for the development team in pushing the game further and setting this year’s edition apart from 2017 and before?

Andre Bronzoni: For three years, we’ve been working really hard on this series since the new generation came out. The focus has always been on the gameplay because we know our crowd loves to play hard and feel like an actual footballer. So we’ve focused on features that build that realism and feel even further. In recent years, we had the idea to recreate the players from the ground up, including their body shape, the way that they run, walks, and moves in the pitch, and more. So for this year, we recreated the players entirely to further nail down that authenticity so you can really feel it when they run, dribble, and shoot. The other thing we put focus into this year was the competitive and esports scene.

GameWatcher: Can you elaborate on the esports focus? What are you doing to make PES 2018 a more competitive edition?

Bronzoni: We’re adding categories to PES League, which is our esports hub. We have a returning mode that hasn’t appeared since PES 6, which is Random Selection Mode. You can choose three teams, mix up the players, and utilize a trade system where you can select three players from your opponent to really make some interesting and varied squads. For the first time, that mode is also going to be included in the PES League. Also, one of our most exciting new competitive modes is going to be three-versus-three, which is where three players take up control of one team against another team of three players. It really brings the dynamic of an actual team together along with some fantastic strategy and dynamics that you might not find or wouldn’t even be possible in one-on-one play. You have to rely on your teammates to coordinate with you to defend, steal, attack, and score. It’s a really good for competitive play and a feature with which we hope to revolutionize the scene. Sports games aren’t very strong in esports right now. We’re hoping to change up a bit that with this new team-based mode. 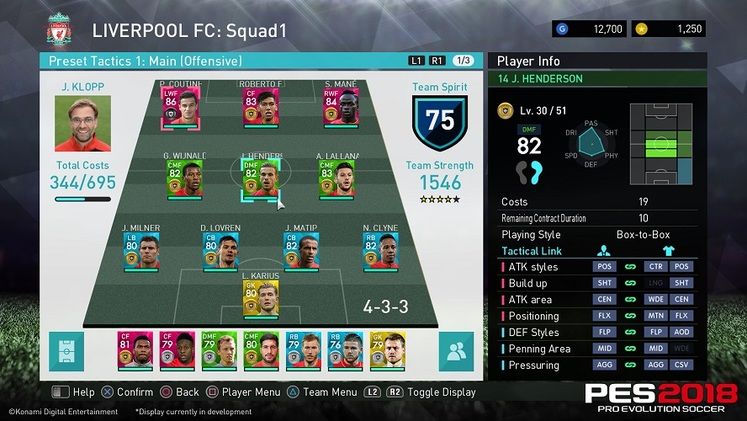 GameWatcher: As good as you can make the AI, there’s not quite a replacement for having multiple human players coordinating and controlling parts of your squad in an active match.

Bronzoni: Yeah, we started this last year with two-versus-two, which is still in PES 2018, but it was for offline play. Three-versus-three is going to be off and online, which is a beautiful new frontier of competition for us. It’s super hard to have a game where every player would pick up a singular member of each squad, but three-versus-three is a much more manageable situation and I’m really looking forward to seeing how it works in PES League and what kind of reaction we get from the players. To be honest, I would love to create my own team and see how we would stack up to others.

GameWatcher: Let’s talk about player behavior a bit. PES 2017 saw a pretty good roster of licensed players in the game and 2018 is looking to up the ante even further, but more than that, you’re going out of your way to not just put the players in the game, their name on their jersey and their faces on the models, but you actually went out of your way to capture their behavior?

Bronzoni: Their reactions, yeah. So we used 3D scanning to get about eight or nine different reactions for each player and then we played with those reactions and multiplied them. So when a guy is about to score, you’ll actually see his face take on a look of focus and determination. If he scores, he’ll look relieved. If he’s closer to his teammates, he’ll look confident. On the other end, if the other team is about to score, he’ll look worried. Just the same, you get sad and mad reactions when things go wrong. The way we’re working that into players and AI, you’ll see the changes in them as the game goes and events play out. You can see goalies complain at their players, players get mad at refs, and a lot more that goes into the sheer realism and immersion of the game in PES 2018. 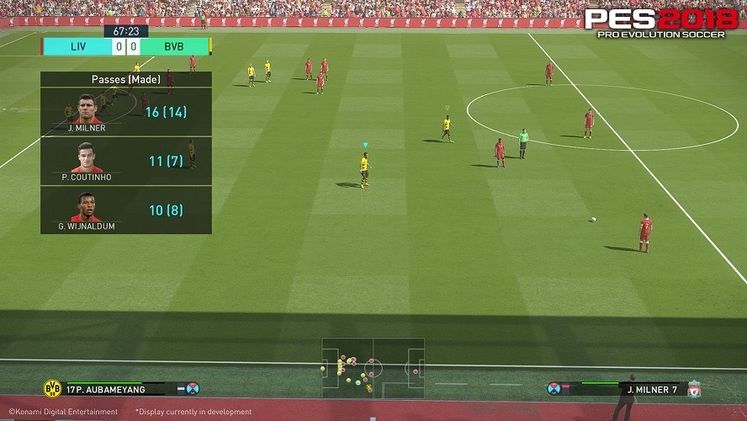 GameWatcher: Speaking of how games play out and realism, how is PES 2018 handling the rules and enforcement of the game?

Bronzoni: We’re implementing the rules of the game better than ever before. With kickoffs for instance, you can have two guys doing the kick off, or you can have one guy do it by himself and it’s an easy switch between the two. We’ve also worked out various penalties like offsides and the like to have more realistic calling on them. We’ve tightened everything up a bit to make sure the AI is watching when you step out of line.

GameWatcher: With that level of tightness will there be any options to loosen the rules if a player just wants to mess around?

Bronzoni: No, not at this time. With as much emphasis as we’ve put into the realism and competitive nature of this entry, we’re invested in making sure that when it comes to competition, it’s a purely authentic and level playing field with as little room for error as possible. For the sake of esports and competition, we need to make sure that everything is exactly right so there is no chance of issues in fairness or anything like that.

GameWatcher: Let’s talk about ball physics and control. PES has held a reputation in the pass for the feel of controlling, passing, shooting, and defense you bring to soccer simulators. How is PES 2018 working to uphold that high standard?

Bronzoni: It’s something we put substantial effort into year after year. This year you can actually see the curve of the ball based on various kicks and you’ll get more out of how the ball moves from various angles. The shadow physics of the ball have changed as well. For instance, if you play a night game, you’ll see the lights reflect the shadow of the ball in different directions as you cross the field. 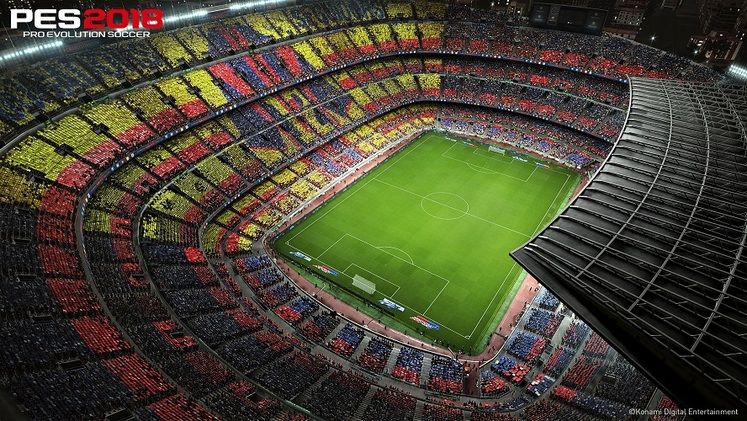 GameWatcher: Weather effects have been pushed further as well this year, yes? Say you’ve got rain. How does that effect the physics on the field?

Bronzoni: Yeah, weather will affect the field heavily. If it’s raining, your players will slide and slip. Dynamic weather is really taking a step forward this year. It started in PES 2016 and it’s one of my favorite features. You could have a game that starts sunny and ends in rain or starts in rain and clears up as the match goes on and that’s a thing that effects players and the ball physics as the match carries on. We’ve worked hard to ensure that no matter the weather conditions, it’ll be very realistic in its look and how it affects the field during a match.

GameWatcher: Speaking of the field, they’re looking great this year. How did the team approach stadiums for PES 2018?

Bronzoni: We’re putting more effort into the way we handle the stadiums this year than we ever have before. We took a ton of images at from every stadium we used at various times during day and night to capture a super high level of detail for the way they look in game. We didn’t just capture the arena either. We worked locker rooms and tunnels into the game this year to bring that extra bit of immersion as players come out from the back for their ceremonies to start the game. We’re pushing the look of the stadiums inside and out for the whole show.

GameWatcher: Does that level of detail translate to the crowds?

Bronzoni: Yeah, absolutely. The crowds have a more lively reaction than ever to how the match is going. If you’re playing at home and an opponent is scoring, you can see how depressed they are, whereas if you’re scoring at home, they’ll go wild. Even staff like the ball boy on the end of the field will react properly to what’s going on when teams are winning and losing. Everyone gets into it on and off the field. 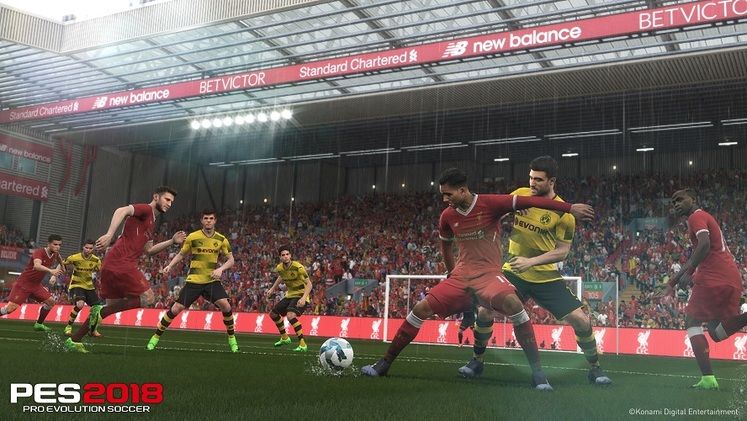 Pro Evolution Soccer used to be the undaunted king of football simulators. The playing field may be featuring a few stiff competitors now, but it would appear that competition is good for everyone. PES 2018 is stepping up the game in new and interesting ways to not just bring an unrivaled level of realism to the pitch, but also provide players with dynamic new means of competition. Can PES 2018 be the one to recapture the hearts of skeptics and set the stage for a new level of pro and amateur play along the way? It remains to be seen entirely, but the bits we’ve seen and played are enough to tell us that Konami is pulling out all the stops. 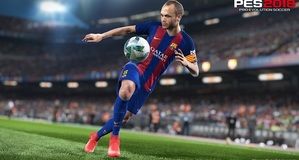