We got a few answers from Jeff Muench about The History Channel: Civil War - A Nation Divided

Jeff Muench: Hi, my name is Jeff Muench and I am the brand manager for The History Channel: Civil War – A Nation Divided. I’m also here with Chris Owen, who is the producer for the game.

Strategy Informer: Where did the idea of creating The History Channel: Civil War – A Nation Divided come about?

Jeff Muench: We were looking to do something new and different for a First Person Shooter military based game. We had previous success with Civil War titles on PC and wanted to find out if a Civil War concept for videogame consoles would resonate with FPS consumers. To our pleasant surprise, the answer was a resounding yes and the concept was amongst the highest we’ve tested with uniqueness scores off the charts.

Strategy Informer: What are the current features for The History Channel: Civil War - A Nation Divided?

Jeff Muench: The game is the first ever first-person shooter Civil War for videogame consoles. You will fight as a confederate or union soldier in 12 of the most famous and bloody battles in our Nation’s history including Gettysburg, Bull Run and Antietam. The game features a wide variety of battlefield combat including line fighting, artillery barrages, urban assaults, sniping, sabotage and stealth missions. You will also use authentic civil war weaponry, experience intense hand-to-hand combat, place explosives, sabotage enemy artillery, destroy buildings and more! The game also provides an awesome cinematic experience with exploding artillery, whistling bullets, falling comrades and more! It also very realistic and historically accurate as the battlefield recreations were based on topographical maps and photographs from the actual battlegrounds. Each level begins with a documentary video describing the key moments of each battle including movement of armies, local fights, historical photos and battle statistics.

Jeff Muench: We consider the graphics for Civil War to be stunning and well-rounded. Most important, we wanted to make sure the weapons and environments looked great. We paid special attention to surface properties so that metal looks like metal and reflects light as you would expect it to. The same goes for other surface properties like wood, skin, cloth, and so forth. And, as the weapons are authentic to the period, we took the extra time needed to create high quality reload and firing animations for each. For the environments, we do a lot of real-time lighting effects which vary from level to level depending on what is needed. For example, in some levels the player will be walking through heavily forested areas where light beams shine through. In other areas, there are explosions and fires which have to look authentic to draw the player into the world. The levels also include a lot of ground detail, including dynamically-generated grass. Also of note, the smoke effects are top notch, which is important considering the use of firearms and artillery from the time period. Mesh morphing was also an important feature for us. It’s important not only for the in-game cut scenes, but also to show the emotion and intensity of the soldiers during battles. Additionally, this gave us the ability to animate water and other objects like flags. Then, there are some other smaller touches that aren’t noticeable unless you’re looking for them. For example, the game features HDR lighting which simulates the human eye adjusting to varying lighting conditions, such as moving from a dark area to a light area in the environment.

Strategy Informer: Could you tell us about some of the weapons that we'll get to use in The History Channel: Civil War?

Jeff Muench: One of the interesting things that I learned when researching weapons was that the Civil War was one of our nation’s greatest periods of military innovation as both sides were trying to find weaponry advancements to win the war. Weapons such as Gatling guns, repeating rifles, hand grenades and exploding artillery were used by both sides in the Civil War and are featured in the game. All of the weapons are authentic to the Civil War era and also include period muskets, revolvers, sniper rifles, sabers, and knives. Here is the full list of weapons:

Strategy Informer: What's the currently release date and is it possible we may see some changes in the future?

Jeff Muench: The game will be released in the middle of November. We are planning for a bonus level to be released via Xbox Live post launch.

Strategy Informer: Do you think its likely people will get the luxury of a demo before it's released? Or perhaps we'll get the pleasure of a Beta test which would be just as good.

Jeff Muench: Unfortunately we do not have a demo available (for the time being, anyway). We will have a trailer available through Xbox Live.

Strategy Informer: Thanks for answering our questions! Before we close the board, is there anything you'd like to say to the fans which are eagerly awaiting the release of The History Channel: Civil War?

Jeff Muench: This game is not your typical FPS military shooter (there are plenty of those around these days). In The History Channel: Civil War, you’re in a world where ammo does not unload as quickly or accurately as in modern military games. Because of this, each shot is a strategic action. Don’t let this fool you though. There are still plenty of intense battles, and moments where you will get to unload your aggression with the Gatling gun. Regardless of the battle, however, you always need to be thinking about the best time to reload your weapon and where to take cover when you need it. With frequent close range fighting and a lack of automatic weapons, melee becomes a necessity – more so than for other games in the genre. In short, due to the nature of the game’s context, The History Channel: Civil War has developed its own unique flavor as an FPS military game. 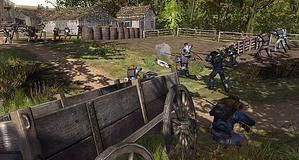