The Lord of the Rings Living Card Game

We had the chance to have a chat with Luke Walaszek, Community Manager at Fantasy Flight Interactive. We spoke about what The Lord of the Rings Living Card Game is, what challenges FFI has encountered during development and what we can expect in each pack of cards.

GameWatcher: Can you give us a brief overview of the game?

Luke Walaszek: The Lord of the Rings Living Card Game is the first title from Fantasy Flight Interactive. It’s a narrative card game that is single-player and cooperative. It’s about completing quests and adventures throughout Middle Earth to get new heroes, unlock new cards and continue this narrative that’s going to be consistent from quest to quest. 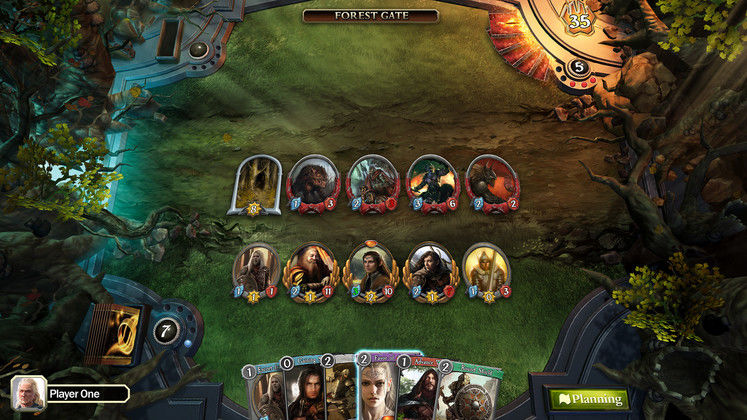 GameWatcher: What kind of challenges have you faced while converting this tabletop game into a digital card game?

Luke Walaszek: I think the number one thing, when the design team at FFI started thinking about this game, was The Lord of the Rings itself. The Card Game was released back in 2012 or 2013 . Since then we’ve iterated on the LCG [Living Card Game] system. We figured out new ways of handling things like how enemies and encounters work and we’ve taken a lot of those lessons and have applied them here, digitally.

We’ve also looked at the digital card game space and thought how can we make this work here too? If we had no limitations from tabletop, how would we build this game? Converting those experiences by keeping it thematically in line with what Lord of the Rings is about has been our number one priority. To us, Lord of the Rings is narratively about a band of heroes coming together and taking on an enemy that’s way bigger and way more powerful than anything they’ve ever encountered individually. The beauty and poetry of the game design is that that is what an LCG is. As players are working together, cooperatively, they’re taking on a bigger enemy - which in this case is the AI, the machine that is Sauron. They’re taking on this enemy and they’re banding together to defeat it. That’s what a card game is all about (in terms of a cooperative card game) and we think that that theme fits very lovely with what we’re doing in the digital space too. Overall, that has been our mission statement: how can we be loyal to the spirit of this game? 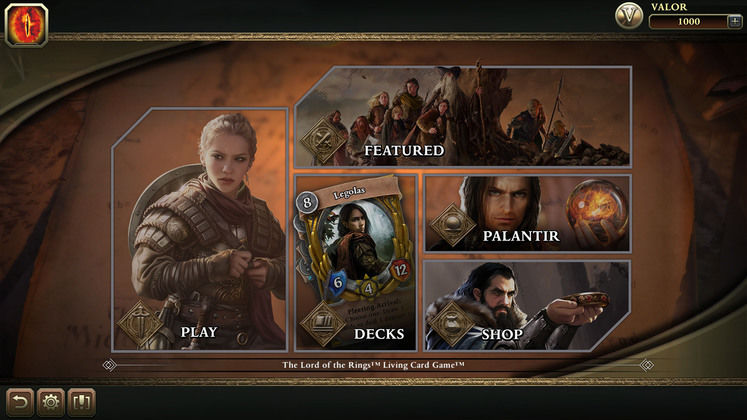 GameWatcher: There are a number of classic Lord of the Rings fans that are concerned about the digital version being overly simplified. What are you doing to ensure this isn’t the case?

Luke Walaszek: A lot of the tabletop natives, the people that are excited about this kind of conversion, they’re concerned that we’re going to go a little too mainstream and that we’re going to turn this game into something that it’s not. So, it’s really important for us to maintain difficulty, it’s really important for us to maintain systems and it’s really important for us that there is no top deck - that there’s no meta game. We want a bunch of different strategies to be able to be facilitated by our cards and we want players to be able to play in a way that they feel they want to play. We also want the cards to interact in a way that feels loyal to the characters so Aragorn has an ability that feels thematically relevant to who he is - that’s something that’s true within the tabletop experience too.

However, the systems that we’re working with here are a little bit different. It’s about making the stories here feel like they’re part of the players’ experience and it’s not necessarily about telling them “go here, go here and use this card against this thing”. We’re making a game that’s wide open but still accessible, and some of the systems like beta cards and core set decks, these are ways of making it accessible to new players while still maintaining the difficulty and complexity that brought the tabletop players over in the first place. 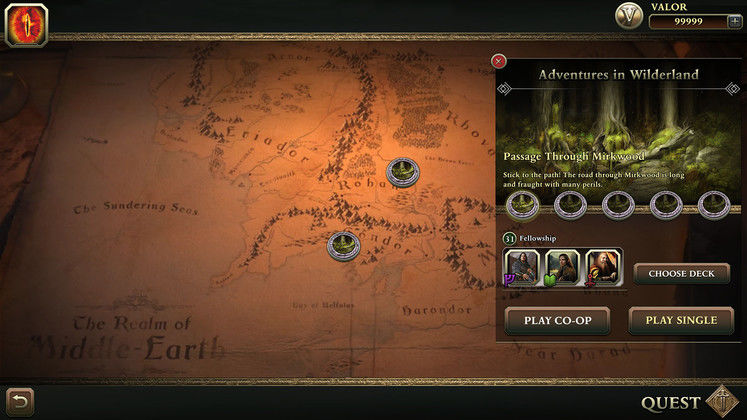 GameWatcher: Lord of the Rings is a PvE game without the ability to play offline. Will this change in the future?

GameWatcher: This makes sense, considering that you’re also planning to release on iOS and Android.

Luke Walaszek: We’ve only announced that we’re doing PC and Mac right now. We’re exploring other possibilities in the future and we want to keep that wide open.

GameWatcher: Ah. I thought the App Store and Play Store icons were visible in the most recent trailer?

Luke Walaszek: It has the Apple logo on it and also Google Play because we have a partnership with Google for distribution, I believe, but we’ve only officially announced that we’re doing PC and Mac right now.

GameWatcher: We understand the card packs in this game are predetermined. How many cards are in a pack, and how much will each pack cost?

Luke Walaszek: We haven’t nailed down final costs right now. Each pack has a main hero in them and then four cards that are thematically tied to that hero. So, there will be a total of five cards in each pack, if you include the hero. Each pack also has one of each rarity: common, uncommon, rare and legendary. This is determined by their power or how they are thematically unique, more than anything else since rarity doesn’t mean a whole lot within our game. 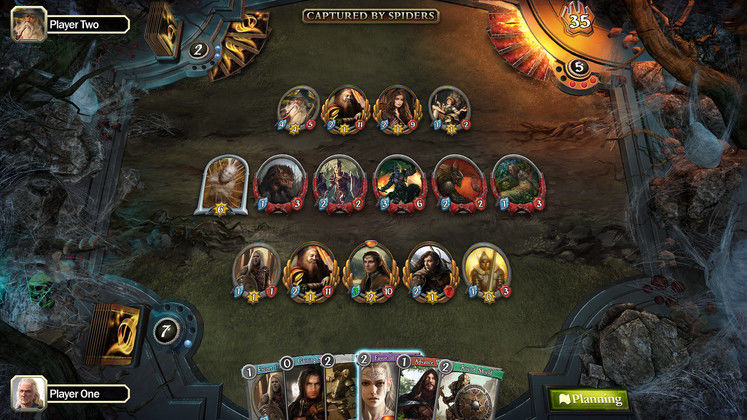 GameWatcher: When are you hoping to release this game on Steam Early Access?

Luke Walaszek: We’re saying Q1 2018, which is rapidly closing in. We’re pretty much on track for that right now.

GameWatcher: What has been the most challenging part of development?

Luke Walaszek: I would say it’s maintaining the spirit of the game for sure. I mean, making something that is simultaneously accessible and complex enough to keep players engaged. Also just making sure that our systems feel congruent with what the spirit of the game is. I would say that that has been our biggest challenge and is something that we’re thinking about constantly.

Another big challenge is balancing the game. Making sure that all the stats make sense and making sure that when we convert this game over that everything feels relatively within power balance. That’s actually why we’re doing Early Access in the first place. We want to be able to get it in the hands of a lot of players who can give us feedback to potentially shift cards, change things, increase power characters etc. Making sure that we find the sweet spot for everybody and making sure that the cards are as balanced as possible has been a huge challenge and we think that Early Access is going to help us out a lot with that. 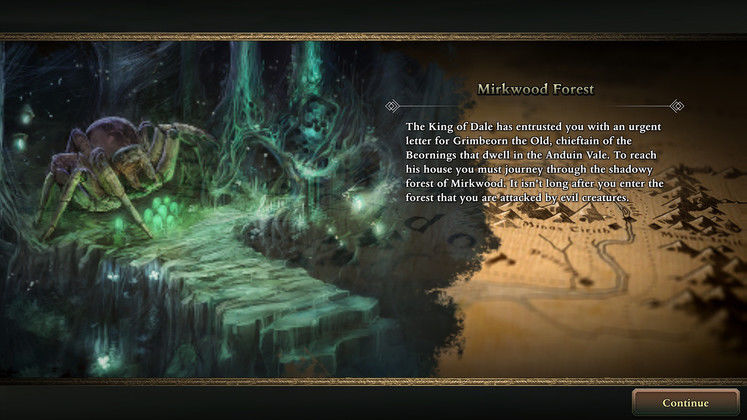 GameWatcher: What do you think makes your card game stand out from others in the genre?

Luke Walaszek: I think it’s the narrative more than anything else. I think it’s the single-player; not having to worry about a ladder, not having to worry about a meta and still being able to get engaged with a card game with some depth and complexity is incredibly rewarding. We’ve seen narrative single-player card games before, we’ve seen competitive card games that are free-to-play, but we haven’t really seen a hybrid like this and that’s super exciting. I will also say that me personally - as a player - the reason that I play card games in the first place is because I feel that deck building is a way to express myself, not only as a player, but also as a thinker. When I come up with a unique strategy or a combo that works very well I feel smart, I feel engaged and it’s a very rewarding experience for me. When I come with something that lets me get through a quest with, say, twenty-five threat or something like that, I find that incredibly rewarding and I think a lot of players are going to feel the same way.

We’ve already seen a community developing around the game on Steam, on the Twitch streams that I do and on social media. People are talking about the game and coming up with their own stuff and I can’t wait to get it in the hands of players so that I can see new strategies develop. Facilitating that community and making a game like that is both in line with what Lord of the Rings means to us and what we want to do with the LCG model.

The Lord of the Rings Living Card Game will be releasing on Steam Early Access very soon (Q1 2018). You can check it out on Steam.

During Early Access, the game is available through three tiers of Founder’s Packs that include additional exclusive content.

The Lord of the Rings Living Card Game Essentials 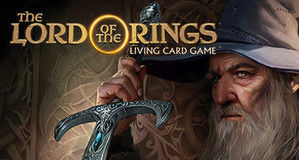