The Lord of the Rings Online: Mines of Moria

Strategy Informer was invited to attend the first UK press event for the new expansion to Lord of the Rings Online. Titled, Mines of Moria

25 September 2008 | By Import
Strategy Informer was invited to attend the first UK press event for the new expansion to Lord of the Rings Online. Titled, Mines of Moria, this expansion adds whole new regions to the game, as well as two new classes and a ton of other new content. In a special one-on-one interview with Executive Producer, Jeffrey Steefel (and briefly Communications Director, Adam Mersky), we talked about what's in store for the future...


Strategy Informer: The Mines of Moria expansion will be adding a whole new area to the game, but will there be any new content for lower level players?

Jeffrey Steefel : Obviously there are there are two new classes, the Runekeeper and the Warden so new players can play with them from the same starting areas as before. The trait system has been changed slightly – it has evolved and been revised a little bit to support new players. But a lot of the content in Moria is geared towards the 'elder' players because we really do believe that the game we've built is a really compelling experience for new players, so when they come in they'll want to play it the same way everyone else has played it. So we won't be spending too much time on that area of things. We spent a lot of time after the launch of Angmar, tweaking and improving things for the first 30 levels, so we won't need to come back to that for a while.


Strategy Informer: With the first game you started out with an initial number of books, and then added more with the patches. Will you be doing the same with Moria?

Jeffrey Steefel : Well we had a set pace that worked for us well last year, and we're going to have a similar pace this year. We've actually decided that we're going to try and launch these expansions annually. So come end of next year, the intention is to launch the second expansion. Between now and then we're definitely going to be releasing several [new] books – but we're not ready to talk about those yet. But they're going to take advantage of the fact that we've moved beyond the misty mountains into Lothlorian and there are all kinds of new places to explore there.

Strategy Informer: Like with the first game, you used the new books to prepare everyone for this expansion. Would it be fair to assume that the new books that you are going to release will be doing the same thing?

Jeffrey Steefel : To an extent, yes. We're always looking ahead towards where we are headed, and making sure the things in Live contribute to that. Whether or not [the new books] will lead right up to 'the next bit' in such a linear way like what we did this time remains to be seen. But there are definitely some things that we will be working on throughout the year for Live – that will be both in front of the scenes and behind the scenes in order so that they help us with what we want to do in the next expansion. We did that for this, in fact some of the interior space technology that you will see in Moria, we were working on that a year ago with book 11. Mainly just to see if this was going to work, is it going to look the way we think it is, do we need to change anything, and so on.

Strategy Informer: With past patches you have added entire new areas to the game. Will you be doing that with this expansion, and will those new areas be inside or outside of Moria? Do you want to keep the focus on the Mines or do you not mind going beyond them?

Jeffrey Steefel : We don't mind expanding beyond Moria. What we add in terms of actual landmass to Moria greatly depends on all the others things we want to do during Live. How it competes in terms of time. But we want to continue to grow the world, always.

Strategy Informer: Because the Moria area is not a dungeon or a separate instance, it's part of the persistent world of LOTR, will it be possible to go 'over' the Mines?

Jeffrey Steefel : Not currently, no. That's a good question though. But you're right, Moria is part of the same world as all of the rest of it.

Strategy Informer: If a player who has Shadow of Angmar currently, who's not quite high enough in terms of level to go to Moria, will they still have to buy the expansion just to keep playing?

Adam Mersky : No. The way we've set it up is that we have the launch game, then the extra books 9 – 14. There's also one extra book that is part of Moria, Book 15, and everyone gets that. That's pretty much completing most of the rest of Eregion , and there's literally a gate.

Strategy Informer: So you need the Expansion to then get beyond the 'gate'?

Adam Mersky : Along with the retail packages that we are doing, we're also offering a digital upgrade for those who don't want the box. For our life time members, and this is a question we get a lot from players, they will still have to purchase the expansion, but they still won't ever have to pay a subscription.

Strategy Informer: Is there a specific ship date and price for Europe?

Adam Mersky : We haven't announced a ship date yet, but we will be announcing it very soon. We will be releasing it in America and Europe at the same time. We will be launching this year. As for pricing, I'm note sure.

Strategy Informer: Looking now at the 'Player vs Monster Player' system, which is quite unique to LOTRO, can you expand a bit on what's new for Mines of Moria?

Jeffrey Steefel : Sure, the things that we will be doing in Moria are two-fold – lots of work on the existing monsters and the classes themselves; as they were sort of imbalanced at launch. Some had several skills and others had lots and lots of skill. Now they all have an equal number of skills so it's more balanced that way, which makes more of the classes interesting. We added this extra 'artefact' mechanic [almost like a 'capture the flag' style game feature], where one side can attack one of the keeps, capture it, and then steal one of the artefacts that belongs to the other side, run it back to your keep (if you can make it there without dying) and protect it. For as long as it is protected it will give buffs for your side. It also gives buff to people on your side throughout the world which is kind of cool, something new we're doing.

We've added a more general balance mechanic to the game, where the system keeps tracks of the balance of numbers on both sides and if it gets horribly mismatched, it will apply buffs to the disadvantaged side so that things even out a bit. It's worked well in BETA, but we'll have to see how well it works at Live scale, perhaps tweaking it a little bit. This is all just one step, now that we're moving through the Misty Mountains to the part where war is really brewing, there are a lot of plans that we have, a lot of things we've talked about. It was always intended that monster play would help take us there, when we get into the more marshal parts of middle earth. This will always predominantly be a PvE game, it's just that the story itself calls for war in certain parts. So that's great, we're going to have lots of people who are more experienced players in middle-earth, and this monster play system will help encompass that. So yeah, we're excited about where that's going to go.

Strategy Informer: The graphics have been updated in Mines of Moria, to an extent, will this effect the minimum requirements at all?

Strategy Informer: You've just started another closed BETA, invite only, what will that be focusing on? What aspects of the game will you be concentrating on whether they work or don't work?

Jeffrey Steefel : It's always about balance, especially for an expansion because your BETA cycle is much smaller. We fundamentally believe in the systems we have changed and added. I think the thing we're most looking at, which we've actually already done a lot on in the US BETAs and in Alpha, is the new item advancement system. We're also looking at the new PvMP elements, and of course we have two new classes. How balanced are they? How do they compare to the other classes? Those are really the things we're looking at most. Beyond that we're just making sure that everything works and the content is fun. Because when you put lots and lots of people into a game, they tend to find new ways to break the game that we hadn't thought of.

Strategy Informer: With the legendary items, will it be easy to tell if someone has one? In keeping with the spirit of the concept?

Jeffrey Steefel : First of all, if you examine them, you'll already know that it is a legendary item by the way it is represented by an icon. It'll also have a title on it, which will be chosen by the player, and not by us. Apart from that, when the item gets to a certain point, it starts to have effects on it, like glowing, sparkling, stuff like that. So you'll see from afar that someone has a legendary item and you'll probably want to go check them out and so on.


Strategy Informer: Just one final question – you came onto this project from elsewhere as you have a personal interest in the title, do you want to see it through to the end? Do you plan to?

Jeffrey Steefel : As far as I know right now. This is the best gig I’ve ever had, I mean honestly I've been doing this for 15, 16 years and you couldn't ask for a better project to be on. We'll see where it takes me! But yeah, Turbine is committed to this, I'm committed to this, the team is committed to this... There's a lot to what 'this' is, right? We're expanding all over the place. I think it will keep me busy from now until, well if I want to, right through to 2017.

And there you have it. Stay tuned for our impressions on the upcoming BETA, plus a preview on our experience at the press event itself.

The Lord of the Rings Online: Mines of Moria Essentials 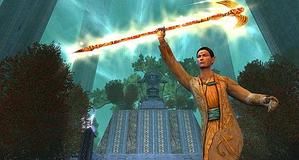