Building a meaningful game around a historical context 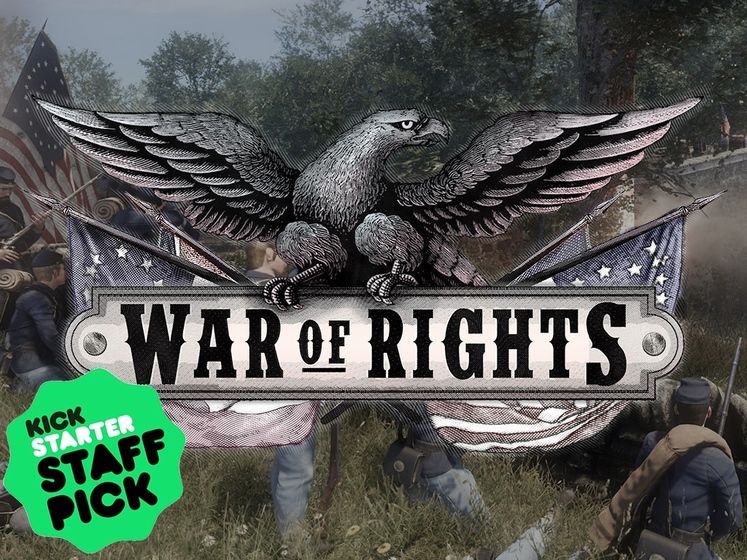 War games and first-person shooters have explored a lot of historical periods. World War II has practically been gutted and we’ve come to a point where a lot of shooters are moving into fictional future periods. One period that has seen little to no interest has been one of the bloodiest and controversial conflicts ever, the American Civil War. Enter Campfire Games. They’re currently running a campaign on a multiplayer game that delves deep into the chaos and tactical strategy employed by generals and their troops during that conflict. With such an interesting project in the works, we took the opportunity to reach out to Campfire Games’ Historical Advisor for War of Rights, Mr. Clark Morningstar and learn the ins and out of what Campfire Games is attempting to do with this project.

GameWatcher: War of Rights is a first-person shooter, set in the Civil War during the Maryland campaign of 1862. Why choose that setting and period in particular?

Clark Morningstar: The project leads were particularly looking at the American Civil War as a backdrop for a game. Mads Larsen and Emil Alexander Hansen were very much into the period in general, but Mads was especially into the war itself. They went on to choose the Antietam Campaign because of its historical placement as a turning point of the war. There was the invasion of the Confederacy into the Northern Union with General Robert E. Lee and this idea that the South was an unstoppable force. This campaign represented a shift back to a more even keel for both sides. 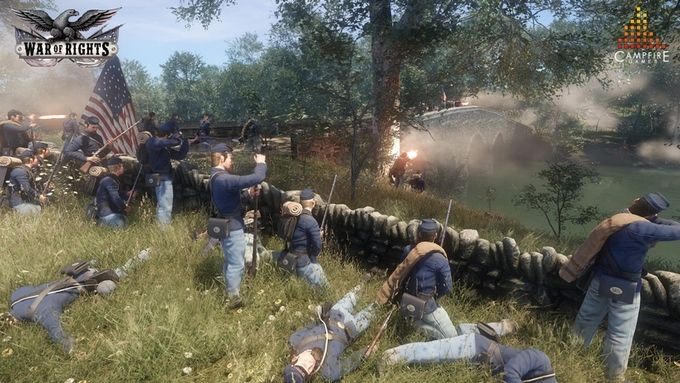 GameWatcher: So one of the goals is to hit on a sort of climactic moment in the war and cover that in the game?

Clark Morningstar: I would say the biggest foundation we’re trying to go for is making a fun game, but also making something educational for anyone who has interest in the Civil War, but has yet to understand or get into it.

GameWatcher: You can take on the role of anyone in the war from private to general. Are all these roles available from the start? Do you pick a role or is it decided for you?

Clark Morningstar: In terms of what’s going to be in the game in phase 1, it’s hard to say exactly what will be available starting out, but we’re planning on having many of them. Anything between Private, Corporals, Sergeant, First Sergeant, Sergeant Major, Color guard, Lieutenants, Captains, and onwards and upwards will eventually be available.

GameWatcher: Color guard? That will be a playable role?

Clark Morningstar: Yes, the Color Bearers served a very important role in the war. This is a time when black powder was predominant which created quite a bit of smoke. The generals in the back had to have a way to see who was friendly and who was not. The flags were the primary form of communication between the regiments and those giving the orders in terms of strategic overview, so to have that flag standing was very important and that will be an element in our game.

GameWatcher: Communication seems to be a big part of this game. Especially in terms of the general role players can take on, being able to see what is going on and convey orders to the troops seems paramount. Can you tell me a bit about how communication will work in War of Rights?

Clark Morningstar: The general will be way in the back at the headquarters. Historically speaking, McClellan was at the Pry House across Antietam Creek, and Lee was in the town of Sharpsburg. On the battlefields in game, these players handling these generals will have access to a battle map which will update periodically depending on how far his regiments are away from him with their positions, as well as the positions of enemy regiments which came within eyesight or firing range of the regiments. He will then be able to issue orders based on what he can see on the battle map to regiments he has at his command. 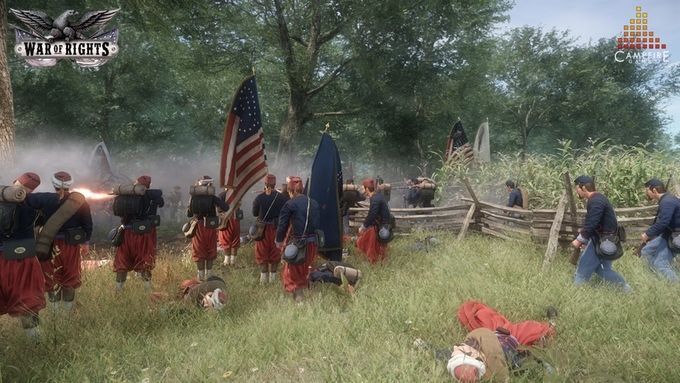 GameWatcher: How will these orders be issued? Is there In-Game voice chat or other systems in place?

Clark Morningstar: Voice chat may possibly be factored in, but the main way by which orders will be issued will be through the chain of command. Captains will have a similar battle map, though simpler and less versatile than the general’s, and it will be updated as the general gives the orders. He will then be able to issue the order to his troops or go against it as he sees necessary.

GameWatcher: What’s to keep a regiment from going renegade?

Clark Morningstar: Generals can always see everything that’s going on. A captain can only see what’s going in terms of the orders issued and what he sees. If a general sees an enemy regiment going off on their own, he can coordinate his regiments to surround them and obliterate them with artillery and infantry. There are certain downsides to not following the orders of the one who can actually see everything going on in the battle. A certain amount of trust has to happen between the commanders and armies.

GameWatcher: So communication is really going to be key to survival.

GameWatcher: Let’s talk a little bit about weapons. There seems to be quite a few weapons in the game based around what was available at the time, mostly black powder rifles. Will they all be available to players from the start?

Clark Morningstar: When we’re in early Alpha, we’re going to be testing a lot of grounds. We’re going to be trying to make all the weapons we’ve shown available to troops, but we’re also going to be limiting available weapons to the troops that actually fielded them in historical context. For instance, the troops in the 9th of Maine only had access to Springfield or Enfield rifles, so that’s what will be available to privates in those roles. Likewise, Calvary had access to the Sharps rifle and infantry variants of it, so players will have access to those weapons in that role.

GameWatcher: How do they differentiate from each other? Is there any reason I might pick one rifle or role over another?

Clark Morningstar: Certainly. For instance, an infantryman with a 1853 Tower Enfield three-band model or 1861 Springfield three-band, the soldiers could put out about 3 to 4 shots per minute. The Enfield was effective up to about 900 yards, while the Springfield was effective up to 500 yards. Compare that to a breechloader like the Sharps carbines and rifles that had about a 1000 yard range and could be shot up to 7 shots in a minute. We’re also implementing actual ballistics and consideration of how the weapons work in the real world and work that into the game.

GameWatcher: There’s obviously also the pistol. Can you tell me about close-range options in the game?

Clark Morningstar: In terms of close-range, we’ve included pistols like the Colts, Remingtons, and LeMats, but beyond pistols, there will also be swords and bayonets. We won’t have them in at the start, but we’ve got plans for the 1861 Light Calvary Saber, 1840 Heavy Dragoon Saber, and the 1840 NCO swords. You’ll also see bayonets on the ends of the weapons such as the triangular bayonets that were used on the Enfield and Springfield or the saber bayonets that were used on the 1840 Mississippi Rifle

GameWatcher: Artillery has been shown in the Kickstarter trailer. Is that a player-controlled element? Will there be physical battery placements in the game that players directly control or is it an off-map call-in?

Clark Morningstar: In the start, artillery is going to be an off map affair with a sort of random placement as to where the artillery hits with no player control over it. However, in later iterations, artillery batteries are going to be physical emplacements on the map that players can interact with and use themselves. There was all sorts of artillery in place during the Maryland campaign, especially by the South, who used everything they had at their disposal including naval guns that troops stripped off of coastal forts to use on the battle field. Other options might include 3-inch ordinance rifles, the Napoleon gun, or the Whitworth rifle which was popular and one of the first breech loading cannons used in war. 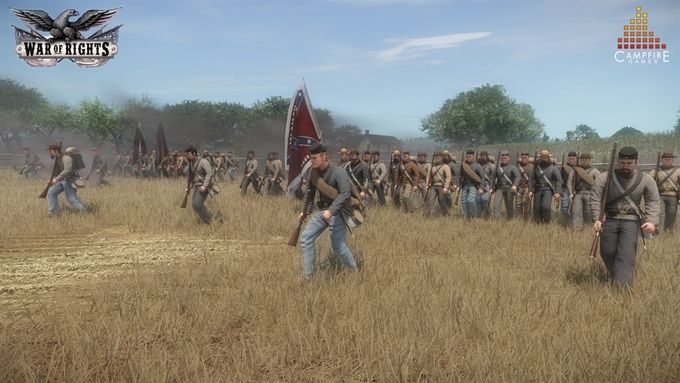 Clark Morningstar: That’s correct. The Historical Battles take up the entire map of the Maryland campaign and players are able to access all of it and fight over the entirety of it. In comparison, Skirmishing maps, while still quite large, are small sectioned down parts of the main battlefield that focus the players into a more constrained and fast-paced experience, though players will be expected to use the same tactics.

GameWatcher: The Kickstarter campaign has already raised over $50,000 of the $106,917 you’re looking for. How has community reaction been for War of Rights? What kind of feedback are you receiving?

Clark Morningstar: We are very excited about this. Feedback has been overwhelmingly positive. We can’t say enough about how much we appreciate everyone’s help and support on this. We hope that people continue to support us with everything we do. It has been an incredible honor to see all the great reactions people have had to this. It would seem that this is something that many people have been looking forward to and we seem to be one of the first to bring it effectively to the table.

GameWatcher: Pending success, what kind of release schedule are you hoping for? Alphas? Betas? Official releases?

Clark Morningstar: In terms of the first iteration, we’ll have Skirmishes Phase 1, which is the closed Alpha and will be available to anyone who donates to the Kickstarter at the Captain tier (£45 or $69) or above. If the Kickstarter is successful, we’ll be aiming to release that within 6 months of the end of the Kickstarter campaign. From there, we’ll then move onto phase 2, which is the closed Beta. We’ll be trying to get that done within 6 months to a year from the Alpha. We’ll then aim to release an open Beta on Steam in Early Access. Hopefully, we’ll be able to share the release of a whole bunch of new functions and items with a humongous amount of people during that. 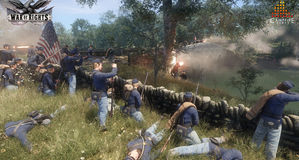