Old "dinosaur bands" who don't do videogames are "just stupid"

03 December 2008 | By Simon Priest
Megadeth frontman Dave Mustaine believes these "old f**king dinosaur bands" should get with the times if they want to stave off extinction.

He fully accepts and seems to embrace that YouTube, iTunes and games like Guitar Hero and Rock Band are "the way of the future." We should "feel sorry" for technophobe bands.

"In fact, I think the advent of these new games and YouTube and MySpace and being able to upload your music — it's the way of the future," says Dave Mustaine.

Metal band Megadeath recently released their album 'Peace Sells...But Who’s Buying?' as DLC for Rock Band, and would "love" to put other works to videogamers too.

"These old f**king dinosaur bands that don't want to put their music up on iTunes or have anything to do with you guys doing games with Rock Band and stuff like that. It's just stupid."

Mustaine selflessly explains we should have "mercy on them" and "feel sorry for them and buy our stuff instead." The wisdom of a Saint, truly. 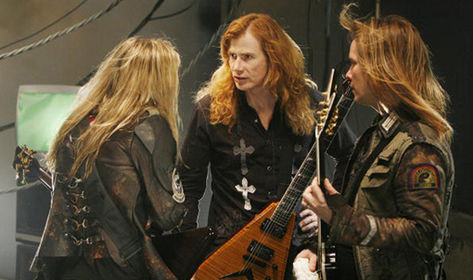