04 February 2008 | By Kres
Cypron Studios announced that they are currently developing a new Real-time strategy game for the DS called Command and Destroy DS. It's a classic RTS game which is influenced by Dune 2, Red Alert, KknD and Starcraft. 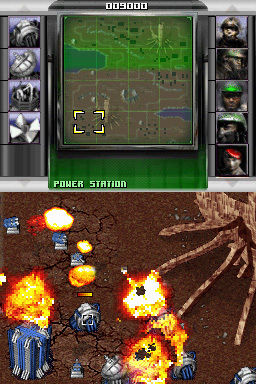 Player acquires credits by exploitation of oil and uses them to build his/hers army. By credits players can build new structures, new units and new technologies. It is up to player strategic planning and his/hers choice of tactics to defeat the enemy. Considering that player can produce many utilities with several functions there are numerous prospects of strategic planning and warfare strategy.

Command and Destroy is a war strategy taking place in the near future where there are two different armies standing against one another. The Player is placed in charge of a leader of selected army's with which he will gradually complete all missions and defeat the opponents armies.

There are two modes of the game available: Campaign (Singleplayer) and Multiplayer.

Command and Destroy will be available in stores for March 14, 2008!

More info on Command and Destroy...