Guitar Hero "a valid experience; it's just not what we're going for"

05 November 2008 | By Simon Priest
Rock Band 2 lead designer Dan Teasdale has said they're not competing with Guitar Hero, despite the new incredibly similar compatibilites with guitar, drums and mics.

"At least from a design perspective" they're going seperate ways. Harmonix developed the original Guitar Hero as "a more technical experience." Rock Band 2 is a different animal.

Teasdale explains that "we're going after two completely different audiences. Rock Band is about an authentic band gameplay experience. We want people to have fun at parties, and we want to reach a wide audience."

The Rock Band developer passed the torch for Guitar Hero over to Neversoft when Activision bought up the franchise.

"We developed the original Guitar Hero as a more technical experience. There's nothing wrong with that, it's a valid experience; it's just not what we're going for," he continued.

"I don't sit around going, "How do we beat Guitar Hero?" I don't need to. My team's got more than enough great ideas."

He compared the situation with Guitar Hero and Rock Band to Call of Duty and Halo, both are great and can be enjoyed. Rock Band 2 is being released on Xbox 360 this November 14th, and so is Guitar Hero: World Tour. 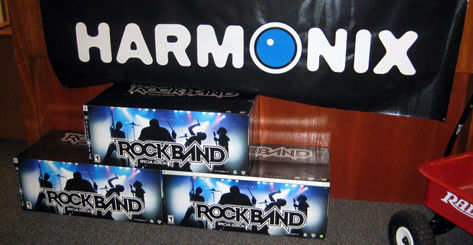