06 March 2008 | By Kres
Codemasters today announced that it's developing Damnation, a new shooter/action game that is coming to the Xbox 360, PlayStation 3 and PC in late 2008. 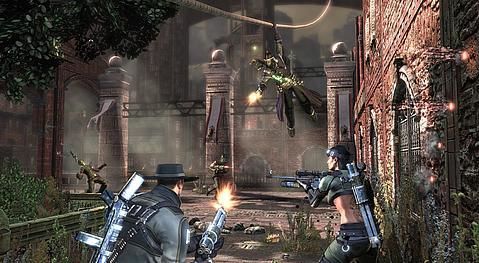 Billed as a 'shooter gone vertical' and visually inspired by iconic elements of American history, these massive streaming landscapes will form the battlegrounds for a post-industrial conflict between humanity and an unstoppable arms dealer hell-bent on total world domination.

Players will be able to choose their own paths and navigate the world by performing daredevil feats on the edge of human ability. However players aren't the only ones with mind-blowing acrobatic skills; intelligent enemies will give chase and engage players in frantic gun fights and attacks that can come from any direction – in Damnation's world there's no safe place to hide.

With up to three hours of actual gameplay stretching out in front of them per level, players will need more than just muscle power to get across each level safely. Damnation will offer players a selection of awe-inspiring vehicles, from motorbikes capable of launching across seemingly infinite chasms, to huge, armour-piercing marvels that will induce mayhem with every huge shell.

The high action will be supported with an epic and in-depth story which, while focusing on the exploits of the hero character Rourke, is truly an ensemble piece. Players will meet and become involved in intricate story plots that reveal much more than the obvious.

In addition to the single player experience, Damnation comes complete with a unique set of multiplayer options that take full advantage of the game's expansive levels. Currently in development at Blue Omega's facilities in Annapolis, USA, Damnation will be available for Xbox 360, the PLAYSTATION 3 system and Games for Windows in late 2008. For more information and to catch a glimpse of what the future of gaming has in store, visit