Rare: Nuts & Bolts concept to "expand" in next Banjo Kazooie

09 September 2008 | By Simon Priest
Neill Harrison, lead technical artist at Rare, has said the team have some "crazy ideas" on where to go with the new building mechanic they hope fans come to love.

If it succeeds then they'll definitely "expand it out" in the next Banjo Kazooie. He revealed that they started out with the same old formula for the duo but it was "a little bit stale."

Speaking with CVG, Neill Harrison and senior animator Ellissa Miller expose some of the thinking back at the Rare team HQ.

The whole Nuts & Bolts concept is "like an introduction to what we could do," says Miller.

"If we went on and did some more then we could push it. If it was accepted and people enjoyed it then we could definitely push it in a much bigger direction. This is like an opening to a new type of gaming I guess."

Harrison explained that if the Nuts & Bolts direction "was successful we've definitely got a load of ideas for what we could do next with the same sort of concept but expand it out."

"But we're just trying to finish this one. People ask us what we're going to do next... I want to go on holiday!" Not until your slavings are complete Mr Harrison.

"We thought well, we'll just do another platform game as Banjo Kazooie. We did that for a bit and as gamers and as developers, it just felt a little bit stale. It felt like it didn't fit in today's market. With the 360, there's just so much more we can do, we thought we'd try something different." 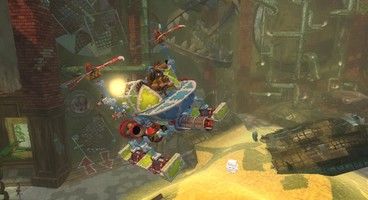 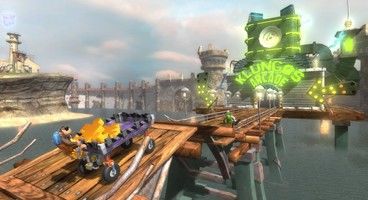