12 March 2008 | By Graymur
Silverlode Interactive released a free version of their MMORTS Saga earlier this week. This free version never expires, but some features are locked. For $19.95 you can buy the full version with all the features. Whichever version you choose, you must register at their site and you're ready to play. 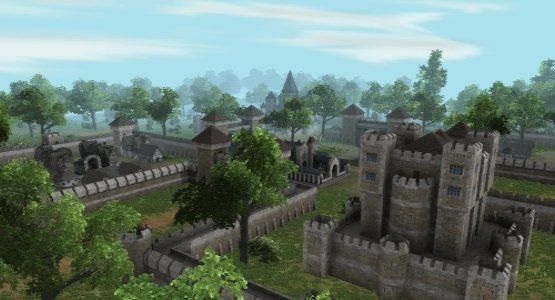 Before the Saga began, the Elder Gods reigned in the heavens. One of the Elder gods, Goth-Azul, rebelled against the established order and the Gods created a prison orb, called Gaia, and imprisoned Goth-Azul deep within its core. But before being imprisoned, Goth-Azul gave the secret of the power of the Elders to a lesser god, Xethos Nom. Together with four other lesser Gods, Xethos used the secret to destroy the Elders, and they claimed the heavens for themselves.

The new gods fought bitterly over who was to rule in the heavens. After much destruction, an agreement was reached. Each god would create a race. These beings would battle away from the heavens, on the surface of Gaia, and whichever race was victorious, their god would reign in the heavens.

Gaia, goddess of nature, taking on her the name of the world herself, created the elves, taking their power from nature and the land itself. Her natural enemies were Rathos, god of war, and Tek, god of machines, both of which scourged the land for resources to fuel their dominions.

Rathos, god of war, made the orcs, tribal and warlike, known even to battle each other for glory on the field. The orcs love to do battle with anyone and anything, but especially with the elves, with their peaceful nature and righteous indignation, and the giants, followers of Ari-Alia, goddess of light, civilization, and peaceful order.

Tek, god of machines, fashioned the dwarves to raise up great machines and technologies to him. The dwarves are gifted in industry, at whatever cost to the land, making them the sworn enemies of Gaia and the elves. They despise and distrust magic, making them scoff and revile the dark elves who follow Xethos Nom, god of magic.

Ari-Alia, goddess of light and justice, sister of Xethos Nom, created the giants, wise and long-living, whose sworn goal is to bring civilization and order to the world. They hate the bloodthirsty orcs, who are chaotic and primitive, and the dark elves of Xethos Nom, whose magic is twisted and evil.

Xethos Nom, god of Magic, brother of Ari-Alia, the lesser god who led the other gods to rebel, is the god of darkness and fear. He created dark elves to do his bidding, a cruel and fearless race, trained in the black arts of magic. They despise the dwarves as ignorant tinkerers, and hate the giants of light for their naïve crusading for justice and liberty.