Research study shows it's best for publishers not to release demos

15 April 2008 | By Jamie Davey
The Electronic Entertainment Design and Research Group conducted this study to find the impact of trailers and demos on a games success. It found that a launch was more successful having released only promotional trailers.

Demos tend to be a 'dagger of Damocles’ for marketing but cried out for by gamers.

This particularly applies to major titles which will see a lot more sales. Metal Gear Solid 4 has no demo and only very quality trailers have been released, which have fuelled expectation and more importantly the anticipation of getting a copy.

Of course this is obvious stuff really as trailers are notorious for over-selling an idea and paving over the cracks of broken promises and design. Mass Effect is an example of this and astonishingly the opening trailer still shows a feature that is never present - if you played the game and seen it you'll have noticed. Where's the crossbow in Assassin's Creed? It’s in the opening trailer...

It is completely down to the publisher or developer to release a demo but gamers want them, most want to be able to sample a game before jumping in with both feet and coughing up the big bucks. This is actually one of the 'reasons' for PC piracy being so wide spread with proponents arguing that cracking games is so that others can try them fully before they buy.

The graphs show that a game with only a trailer tends to sell much better than one with a demo or both. Would a demo have changed the fate for Ubisoft Montreal's success with Assassin's Creed? Would Grand Theft Auto IV sell even more numbers if Rockstar unleashed a sizeable demo version? It's these questions that keep top scientists up at night. 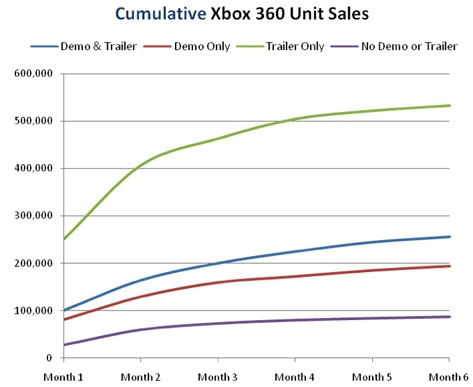 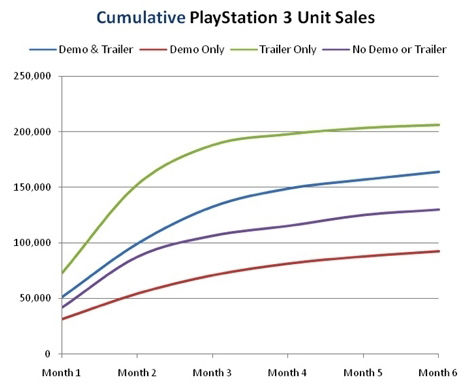