16 December 2008 | By Simon Priest
Not only are they a modern delivery system for bands but they "might be rearing an entire culture of future musicians," says guitarist Kirk Hammett.

Speaking in an interview with USA Today, Hammett and drummer Lars Ulrich give their take on the Guitar Hero generation, and talk about the impending Metallica edition.

"It's going to open people up maybe to the prospect of taking the whole thing one step further and actually picking up an instrument. We might be rearing an entire culture of future musicians. That prospect is just super-cool," says Hammett.

As for Guitar Hero/Rock Band like games as a music delivery system?

"I have a sneaking suspicion that the video game industry and the record industry are going to eventually just merge into one big thing," he continued. "That's cool in that it gives you a different sort of dynamic, a virtual aspect of the delivery of music rather than it just being one-dimensional. It's enabling the artists to present the music in a very new and different and modern way."

"It's unfolding as we are watching. It is definitely the new frontier. We put out Death Magnetic the day it came out on downloadable format for the game, and it's been through the roof and reception has been incredible," added Ulrich. 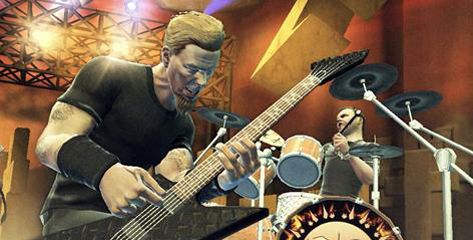