22 May 2008 | By Jamie Davey
The developers have revealed the first adventure Strong Bad and his cartoon compatriots will be having in their first episode.

The will be five in total and the first has been called 'Homestar Ruiner' which sees a depressed Homestar "mucking up the masked man's plans".

"It starts as a typical day for our animated hero, who gets busy checking his email, playing some Snake Boxer 5, and bugging his friends," explained Telltale.

"But the tables turn when a scheme to win the tri-annual Race to the End of the Race sticks Strong Bad with an unwanted house guest: Homestar Runner, disgraced athlete and all-around downer."

"With a depressed Homestar mucking up the masked man's plans, Strong Bad must find a way to get his dimwitted adversary back on the Free Country, USA A-list and out of the House of Strong, once and for all."

Strong Bad's Cool Game for Attractive People is expected to start this June on both the Nintendo Wii and PC. The game is based on the Internet cartoon Homestar Runner, which follows around one of the most dysfunctional groups of friends ever conceived - laughs are a given. 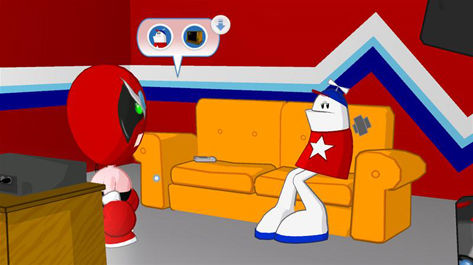