Call of Duty: World at War features Co-op and Flamethrowers 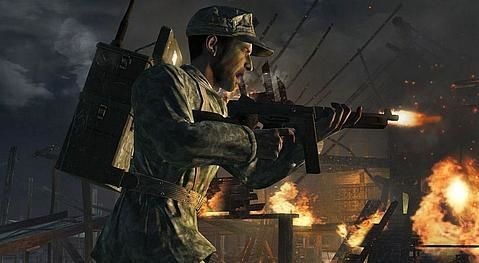 Activision and Treyarch have official announced Call of Duty: World at War, with new details included in the official press release. We can now confirm that Co-op will be enabled and a flamethrower will also be featured in World at War.

Leave your packs and bring extra ammo, Activision, Inc. (Nasdaq: ATVI) and Treyarch, announced today that they will be taking Call of Duty players deep into the South Pacific and European theaters this fall for Call of Duty: World at War™, a gritty fight that will pit players against enemies that know no surrender and show no mercy. Utilizing the Call of Duty 4®: Modern Warfare engine, Call of Duty: World at War throws out the rulebook of war to transform WWII combat through a new enemy, new tactics and an uncensored experience of the climatic battles that gripped a generation. As U.S. Marines and Russian soldiers, players will employ new features like cooperative gameplay, and weapons such as the flamethrower in the most chaotic and cinematically intense experience to date.

“With Call of Duty: World at War, we’re re-defining what it means to play a WWII game,” said Mark Lamia, Studio Head for Treyarch. “We’re excited to give players a host of new enemies that employ entirely new tactics, as well as new, groundbreaking tools – like co-op and the flamethrower – to succeed in the epic fight.”

Call of Duty: World at War introduces co-operative play, bringing fresh meaning to the “No One Fights Alone” mantra with up to four-players online for Xbox 360, PS3 and PC, or two-player local split-screen on consoles. Nintendo Wii will also support a unique co-op mode for two players. For the first time ever players will experience harrowing single-player missions together for greater camaraderie and tactical execution. The co-op campaign allows players to rank up and unlock perks in competitive multiplayer by completing challenges and earning experience points, adding continuous re-playability and team-based gameplay. Whether playing competitively or cooperatively – if players are online with Call of Duty: World at War – they will always gain experience points. Based on a player’s experience rank and rank of the player’s friends, Call of Duty: World at War will scale dynamically to provide a deeper level of challenge.

Call of Duty: World at War is in development for the Xbox 360™ video game and entertainment system from Microsoft, PLAYSTATION®3 computer entertainment system, Nintendo® Wii™ and Games for Windows® PC. The title is scheduled for release this fall and has not yet been rated.

For more information and exclusive updates about Call of Duty: World at War, visit www.callofduty.com.