23 June 2008 | By Jamie Davey
The infamous nemesis of all things multiplayer - lag - had teamed up with the mighty shotgun to leave many online matches one sided in Gears of War.

Epic have been hard at work and expect to do away with the unfair edge of the host. Chainsaw duels to help out to, providing you see them coming.

The shotgun has always been a contentious weapon throughout most online shooters but people have gotten rather tired of the lag mishaps for Gears of War as CliffyB tells GamePro, "they got tired of the shotgun inconsistencies."

"They didn't like the randomness of the chainsaw, so we put the chainsaw duel in - may the best man win!"

The duel is to help keep lag-related sawings down to a minimum by forcing a duel to decide the victor. Of course for this to work both have to have the gun and be facing one another. The animations won't offer the players invulnerability either this time around, your team mates could help you out put planting a bullet in some delicate places.

Even the cover system is getting a boot to its rear as they hope it will feature a lot better.

Gears of War 2 is being exclusively released on Xbox360 this November. 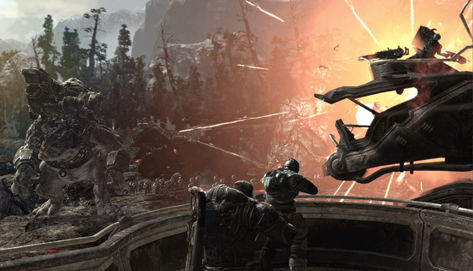